The 'Authority' of Paganism 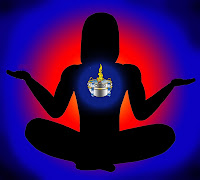 In some of my Facebook religious discussions, someone asked what we rely on as ‘proof that Paganism is real’.  It took some discussion to arrive at his actual question. He was discussing religion with a convinced Christian, who held up his Bible as ‘proof’ of his religion, and was poking around for a way to answer that without attempting to discredit the claim of the Christian. This is a goal I admire – we should have good answers of our own, and not rely on disproving the authority of someone else’s scripture, no matter how well-barrelled the fish may be.
Because our OP was new to Paganism, I begin with some basics. Always worth a bit of restatement…

'Paganism' can, for the sake of this discussion, be defined as "the naturally-occurring religious impulse of a local area" By naturally-occurring I mean that it hasn't been brought in by preachers or prophets, and reflects the tradition-whose-beginnings-aren't-remembered. by 'religious impulse' I mean the human inclination to make relationship with a perceived 'spiritual' reality - with the persons and beings seen to reside in the world. by 'local area' I refer to the worship of beings local to the religion - the god of *that* mountain, *those* stars.

Paganism like that isn't revealed by the divine to mortals as commandments and prescriptions. Rather it grows out of the nature of humans, matter and the divine, the same way plants and animals grow, and the way that music or poetry has grown among humans. It "just is". The rest is detail.

To be fair, one should look at a little of that detail. The Pagan religions that early Christians knew were the indigenous and traditional religions of Europe and the Middle East. While modern historians have theories on where those cultures came from, and how they grew, for those living in Rome or Ireland the ways were just the ways - the stuff people had always done to keep relationship with the spirits. They didn't have an original prophet, or a 'founder'. They didn't have a 'scripture' on which the Ways were founded, they were a collection of customs, ways and specific artistic inheritances (hymns, images, etc) that together made up the 'religion' part of life.

Our modern Paganism is a set of efforts to reclaim the kind of spirituality enjoyed by the ancients. We observe the work of modern polytheists (there are a few 'pagan' religions still in business, unbroken, but not many), study the records of pre-Christian religion in Europe, cobble together experiments and try them, and through all that we devise ways of relating with the spirits that we hope resemble those of the ancients.

Some specific modern Pagan systems can be said to have founders. Gardnerian Wicca, specific Asatru organizations, ADF all have known histories. However in every case members of the systems take them home, experiment with them and vary them as local conditions warrant. There is no original 'authority'.

Perhaps that's what your original discussion was really about - what is the *authority* of Paganism? Christianity places great store in the authority of their scriptures, allegedly authored by their God, and thus the Final Document in all disputes. Paganism neither needs nor wants any such thing, and never did. In my spirituality the Authority of the divine rests in my own heart. The divine is distributed among all things, and that includes us humans. When I decide to approach the greater divine (the gods, etc) I do it by my own will and work, informed by the teachings of others like me in the past. Certainly the spirits give their input and inspiration, but they are partners in the work, not lords of it. Paganism has the authority of nature - it exists because it was natural for it to exist, and nature is the true depiction of the divine.