Magic in the Grove 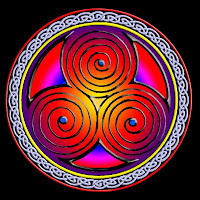 Here's a glowing review of Starwood, the festival I helped to found and have helped to organize for each of its 29 years. Always nice to get unsolicited praise, and also nice to see a mention in the Wild Hunt Blog as well.
Posted by IanC at 4:31 PM No comments:

Here's another excerpt from the in-progress Book of Nine Moons. This is an abridgement, but should give an idea where I'm headed with the effort of adjusting the folkloric and mythic perspective on the "Otherworld" to a more modern perspective.
Trance Vision and the Threshold of the Otherworld

Part 1 – Concepts of the Other
Throughout Celtic story we find humans meeting the spirits in ways and places outside of or beyond common life. Gods, messengers, allies and opponents arrive among mortals bringing tales of their homes, of strange halls and wild places both near and far. In turn the tales tell of mortals who visit Other Folk. It is from these tales that we begin to understand the nature of what we often simply call the Otherworld.
The tales describe the dwellings of the Other Clans as being both very near to our mortal world and very far from our common lands. The armies of the Sidhe ride out from beneath the land. Mortals enter the courts and feasts of the Lords of the Mound, leaving behind common time and place. Other tales tell of emissaries arriving from over the sea, or of mortals who voyage, and of the lands of wonder, danger and vision that lie beyond the ocean wave.
Your studies should offer plenty of chances to read these tales. It is useful to immerse your imagination in the motifs of Celtic story. These provide raw materials with which we can build an understanding of the Celtic Otherworld.
It may be that the ancient idea of the Otherworld bears a resemblance to various metaphysical models. Those familiar with western magical systems might compare the Otherworld with the ‘astral plane’ or the ‘etheric realm’. However, the Celtic spirit-lands don’t seem to be causal to the common world in the way the ‘astral’ is sometimes described to be. We might find a parallel with the Dreamtime of the Australian First Peoples – a mythic, storied and ritual reality in which mortals participate along with the Gods and spirits. Hindu cosmology presents a variety of ‘lokas’ – worlds – in which Gods, spirits, ancestors and daemons dwell. The Norse have a similar system of Nine Realms. Celtic lore is far less specific about the number and order of the realms or worlds, though a variety of environments are described.

Part 2 – Vision and the Threshold
In this month’s first exercises we will enter an imagined series of landscapes and environments. In some cases we will consciously select or design the spaces. In others we will enter visions that we do not deliberately create. We will consider this half-constructed, half-discovered imaginal world to be a Threshold, a place Between the common world and the independent reality of the Other Places. We can move our point of view, our ‘presence’, into this Threshold realm in a form we invent, and in the same way the Gods and spirits can create forms that move and live in that space. The forms we see (and make) in the Threshold may or may not be the ‘true’ forms of the spirits but that need not prevent us from speaking to them through those forms. The Threshold is a reflection both of our common world and of the Other realms beyond.
While we may consciously shape and influence it, the Threshold realm exists without our conscious making. Just as the landscapes of dream occur as if subjectively real so the places of Threshold are waiting for us when we arrive. Just as in a lucid dream we can shape events and places, but the life of the Threshold realm goes on, around or even without our conscious constructions.

Part 3 – First Steps in the Mist
The very first Threshold technique is to learn to rise and move within an imagined point-of-view. In some spiritual systems students are taught to develop a detailed, repeating and specific ‘body of vision’ which serves as the seer’s ‘vehicle’. This does have value, but we find it best to recommend a more natural approach. Each of us carries a basic self-image and it is in that form that we can most easily approach our vision journeys.
One important trick of basic journey-work is to train yourself to keep your point-of-view located ‘behind the eyes’ of your vision-self. By learning to keep your point of view firmly fixed in one place and in one direction at a time you create a sense of reality in your early visions that helps you move into the Threshold realm. Your point of view may move by drifting, flying or purposeful striding but you should be careful to keep it in one place at a time in most cases.
From that beginning you can move deeper into the Threshold in a variety of ways. We will use a symbol drawn directly from Celtic story – the Mist of the Between. By passing through the vision of the thick mist so common in the ancient forests you can emerge much deeper within the Threshold realm.
By passing the Mist we seek to enter a space in which we can both discover and create a greater, more ideal Sacred Grove. In next month’s lesson we will move on to the work of passing the Mist and beginning the Inner Grove. This will become a base of operations for many further visions and workings.
Posted by IanC at 4:32 PM No comments: 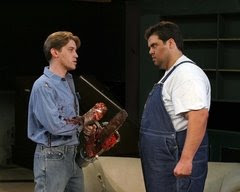 Well, I haven't finished anything actually relevant for this blog, what with life, summer and all, but one reason I haven't was our trip across two counties to see Evil Dead - the Musical. Yes, that's right. A two-act hi-bleedin'-larious homage to Sam Raimi's classic horror-comedies. And I mean bleedin'. My totally good-sport wife and I were rained upon with the spurting blood of the various dismemberments, gun-shots and staggering headless and armless corpses. Fortunately we were wearing our handy $7 splatter-zone t-shirts, which we may never wash.
If you're as out of touch with pop culture as I know some of you are, you may have missed the 1981 classic blood-and-demon fest of The Evil Dead. Sam Raimi's first success (decades before Spiderman) was a pretty serious frightener, though you could see Raimi's sense of comic timing already working. It was also the premier film of Bruce Campbell, one of my favorite almost-a-leading-man actors. (See him old and grizzled in the cool spy TV thing Burn Notice).
In ED, five college-age friends head up to an old cabin in the woods for a weekend of booze and sex. There they discover that an Old Professor has found the Necronomicon and has awakened some Kandarian Demons. Hijinx ensue. If that sounds hackneyed just realize that 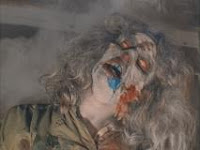 Raimi did it first - lots of fanboys had their fist hearing of 'Necronomicon' in these flicks.
Evil Dead was made on a shoestring and made some money, which Raimi used to make Evil Dead 2 - a much more overt comedy, with Bruce Campbell in the first and still best Fight With Your Own Hand scene. The third flick (don't ask me how, just now) becomes a medieval fantasy, with Bruce's character, Ash, forced to brave the Army of Darkness to secure the Necronomicon.
The three movies are mashed up into the mere excuse of a plot in the musical comedy. The events of the first film are followed pretty closely, and some of the best stuff from the second film gets used. The third film mainly gives us some of the choice lines of Ash dialogue... "This is my boomstick!" But the story is really just an excuse for the musical numbers. It's all singing, all dancing as the kids and various other characters either become demons themselves or madly kill and dismember demons. The few remaining living people must save the world from the dancing demon revue, and of course they do, reciting the ancient Sumerian incantation after the climactic dance in which the demons reverence the Necronomicon in various popstar drag.
This little evening of theater had 400 performances in Canada, and has already had it's Cleveland run extended. Presented at the Beck Center, in Lakewood, we were in the Studio Theater, with about 120 seats. Good use was made of the little stage, with curtains to take us into the woods, etc, and the interior set of the cabin was nicely tricked out with special effects. All the singing voices were top-notch. I had gotten the soundtrack from the bigger Canadian production some time ago, and this local cast (with just one equity actor, as Ash) did the material nicely.
But it's the script and lyrics that keep the laughs coming. It's a cheek-buster, and even people who aren't geeked-out on the original movies will find plenty to laugh at. Totally profane, as well. Ash finds several occasions to exclaim 'fuckwaffle!'. If this comes near you, you should go out of your way to see it. A fine excuse to watch the flicks again first, too...
Posted by IanC at 5:32 PM 1 comment:

I've just added a new link to Erynn Laurie's core site about her version of Celtic mythopoetic practice, which she calls by the Irish name of Filidecht (of poets). I've posted a lot about the occult/sorcery angle here, and maybe not so much about Celtic reconstruction efforts (whether formal CR or not). Erynn is one of the founders of the modern Neo-Celtic spiritual movement, notable for her unearthing (or publicizing - not quite sure which) of the Celtic poetic piece "The Cauldron of Poesy", and for her very important recent work on the Ogam. Her site also offers a very cool ogam deck in pdf. I have the file but haven't made the cards yet...
So, I'll be posting more Celtic and Druidic links, just to flesh out the useful resources here on el bloggo. Look for that review of "The Flaming Circle" by Robin Artisson this weekend, if I can manage it, and a wellspring review...
Posted by IanC at 1:52 PM 3 comments: