(One of these ‘FAQ’ articles…)

One of the most important new developments in Pagan and even ‘western’ occult/magical ritual in the past decades has been the adopting of material offerings to the gods and spirits as part of invocation and welcoming. Continuing research into the actual practices of ancient polytheisms, combined with observations of modern surviving systems, has led many modern Pagans to offer food, wine, silver, etc to the Powers. Many of us have experienced significant results, comparing previous work done without offerings to work that includes them.

Traditional Pagan ritual was/is centered on the making of material offerings to the Gods and Spirits. The business of pouring flammables or food into the fire, of dropping silver into the earth forever, of viewing incense as a burnt offering and not just a way to perfume the space were not a part of early Neopagan ritual, though they were central to ancient Pagan ways. Perhaps it was remnant Christianity, transmitting the notion that ‘sacrifices to daemons’ were improper, that prevented early witches and Pagans from adding offerings to our rites. Certainly the notion of animal sacrifice was rejected from the outset, and that rejection carries over into most modern Pagan restoration work. In Our Druidry we are specifically forbidden from offering an animal’s life in our rites.

For many Pagans this prohibition would certainly be a moral one. Many (not all, and probably not a majority) Druids are vegetarian or vegan, and some are concerned with the modern idea of animal rights. However many Pagans are meat eaters, and meat is sometimes offered in ritual, as a food offering. This has led to discussions, over the years, about the moral unclarity of eating factory-butchered livestock while refusing to be involved in the work of killing. Some people find no moral objection to the idea of offering an animal to the gods, butchering, cooking and eating it in ritual. However the practical obstacles to successfully killing, butchering and cooking a small animal for sacrifice are considerable. Simply put, and taking all into account, it is easy to make powerful, significant offerings without taking the life of an animal.

So we have developed a style of ritual in which invocations are almost always accompanied by offerings. The most common offerings used are either vegetable oil (olive oil burns best) or powdered incense or herbs given to the fire. (At this point I imagine most any ritual centered around a fire, real or token.) At home shrines incense sticks make a convenient, if modern, adaptation. Also common are offerings of drink – frequently ale, mead or whiskey. These may be spilled directly on the ground, poured into an offering bowl to be given to the ground later, or sometimes poured over an image. Food offerings are often given, bread, honey and butter being common. Other common offerings often include flowers, clear water and precious metals and stones.

Whenever possible burnable offerings are given directly into the Fire (or burned in the censer if you’re working at a candle-ring Fire). Silver, metal and stones are often offered into the ritual water – the ‘Well’. Some Groves and Hearths allow silver to accumulate in the Well, occasionally offering much of it into some place of water or earth. Others deposit such offerings following every rite. In general all offerings should be deposited outdoors when the rite is complete, no later than the next sunset unless special reason dictates otherwise. 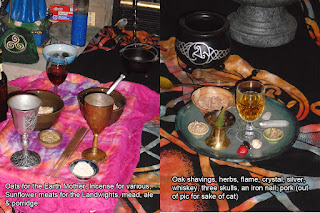 Those who live in the concrete circumstances of some cities will benefit from finding a way to take their offerings to bit of bare earth. Offerings should never be taken back into your own use – once given they must be discarded or destroyed entirely. The exception to this is whatever portion of a food offering is shared in turn with the participants in a rite as a part of the Blessing.

AS you study the Old Ways you may find rules about offerings held by specific ancient cultures. For instance among the Hellenes offerings to the Celestial and Underworld Powers were separated, made in different ceremonies in different ways. Such cultural rules are a matter of choice for modern observances.

One small technique borrowed from Eastern methods is helpful for those working indoors on a small scale. While offerings made entirely in one’s imagination may not be worthless the grounding of mental effort in even a token material basis seems to generate more connection. So do not hesitate to let your small piece of bread and butter or honey serve for a feast, and a small offering of ale or wine for drink. Offer such things with an open heart, and the vision of that which you would give a king in your eyes. Such a token might be left on an altar a little longer than a larger offering.

Let me also say that making such token offerings at a home shrine seems more effective if/when you have previously made more substantial offerings. When we have come to the Fire and made offerings, poured our gallons over the stones, etc, we are more believable when we offer by the ounce.

Bullet-Points:
• Offerings are usually either to be burned or given into earth or water.
• Incense is a fit basic offering for indoor rites. Don’t be stingy – send up a good smoke.
• Keeping offering-vessels filled with clean water is a basic as well. The water-offering can be basic to any further work.
• Use food items of a simple kind that you would eat. Bread, fruit and tasty treats are common choices. Full formal meals may be offered as proper, but token gifts can be placed before images and left for a time before disposal.
• Use an offering bowl to collect earth-offerings for disposal. This is helpful even if those offerings are left at a shrine for a time. Bread, wine, bits of crystal, whatever, all can go in the bowl for the Earth in their time.
• To make offerings, decide where and how you will make them; light your fire, true or in token, and bless the Water with a simple prayer; Invoke as you wish, proclaiming your offerings as you make them; Many modern invocation texts include moments for offerings. Oil to the fire, or incense, can always serve if you do not have a special offering for a spirit.


• If you wish a more complete list of fair offerings for a noble guest: Clear water; bread and honey; ale, wine or other drink; silver or copper for precious metal, clear quartz crystal for precious stone, incense, flowers, etc…

Modern Paganism, in adopting the custom of material offerings hopes to develop a sense of reciprocity with the Powers, which seems to have been central to ancient spirituality. Worship is a mutuality among allies, in which the Powers acknowledge the worthiness of our welcome, and we welcome the worthiness of their generosity in turn. In this way the flow of exchange is maintained, which is said to be the life of all beings.