A Prayer to the Mothers

In the world of formal neopagan 'Church' in which I do my work, people are often moved by the news of the day, and the distant suffering of strangers is brought to us in our hands through our media. Whether or not one supports the involvement of religious work in chosen 'causes' it is the plain goal of Wisdom to help people process our reactions to life's troubling events, and choose the best path toward better outcomes. In the Clergy Council of Our Druidry we discussed the creation of prayers and works proper to circumstances as they arise in the socio-political currents.

After a few drafts this arose for me. Writing it brought me up against several bumps in my road to 'topical prayer'.I believe (not a phrase I start sentences with often) that my progressive values are simple and rational, and conform well to my polytheism, and even to many (not all!) of the tropes of ancient society. So I ought to be able to write a prayer that asks for the kind of good I want, without beginning to cite specific circumstances that I want changed.(This produced the insight that a prayer tells the gods what kind of world you want, while a spell or charm aims to make specific changes...)
I want to write things that seek what is unarguably The Good, regardless of the times, or the circumstances of this quarter's politics, or the specifics of issues. I believe that by doing so I will advance progressive ideas, since those inhere in nature. Likewise I want the work to remain useful even after whatever current political circumstance may have inspired it has passed away.
I feel the asking-for part of this verges a bit close to the recitation-of-modern-political-norms thing, but I still rather like it. May it be a blessing to the work.
(plain text below graphic) 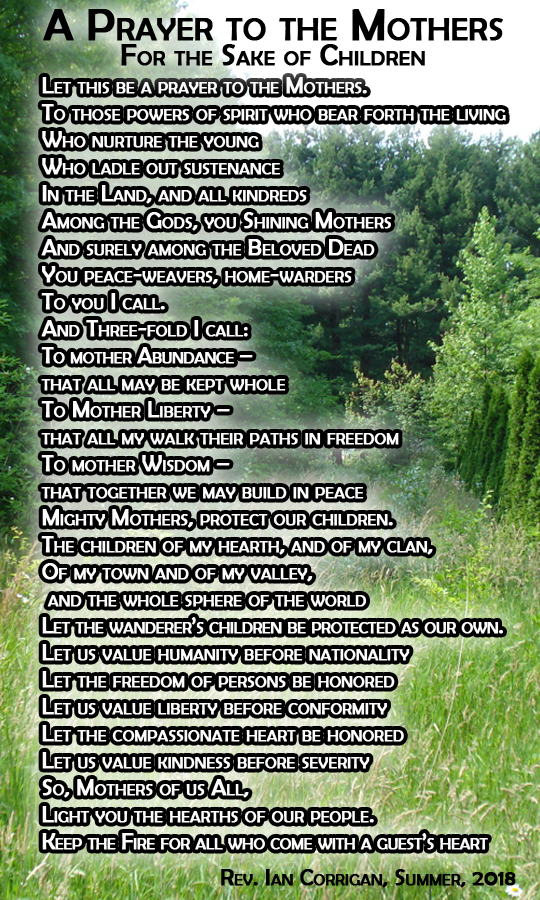 A Prayer to the Mothers
For the Sake of Children

Let this be a prayer to the Mothers.
To those powers of spirit who bear forth the living
Who nurture the young
Who ladle out sustenance
In the Land, and all kindreds
Among the Gods, you Shining Mothers
And surely among the Beloved Dead
You peace-weavers, home-warders
To you I call.
And Three-fold I call:
To mother Abundance – that all may be kept whole
To Mother Liberty – that all my walk their paths in freedom
To mother Wisdom –that together we may build in peace
Mighty Mothers, protect our children.
The children of my hearth, and of my clan,
Of my town and of my valley, of my mountains or plains.
Let the wanderer’s children be protected as our own.
Let us value humanity before nationality
Let the freedom of persons be honored
Let us value liberty before conformity
Let the compassionate heart be honored
Let us value kindness before severity
So, Mothers of us All, keep you the hearths of our people.
Let The Fire be lit for all who come with a guest’s heart
Posted by IanC at 6:37 AM No comments:

If you hang around me for any length of time, you discover that I'm a singer. I mean, I do perform on stage, with L. in a formal way. I'm also likely to burst into song at random nearly any time... sometimes whatever earworm or free-association has appeared in my head, sometimes just nonsense-lyrics to my cats. Nature gave me an acceptable voice, and I've worked it all my life, so I enjoy using it.


A.D.F. (Ár nDraíocht Féin) the Druid order I work in, is rather full of folks like me, in that regard. As a group focused on the pre-Christian religions of Europe, very little is more authentic to the spirit of the Old Ways than the singing of traditional songs. ADF rites are intended to be tuneful, with songs for walking and standing, for worship and for receiving blessings. It helps move us from the atmosphere of a ceremonial temple to that of a joyous village even as we do tight, detailed ritual.
After a cup of mead (or whatev) there is likely to be singing at our campfires. At least here in my region many of us share a certain repertoire, derived from the British and Celtic folk revival of the 70s and onward. We have grown up, musically on some of the same albums and performers, and these songs tend to burst from us at the slightest poke.


The body of song and music that grows from the culture of the British Isles - England, Scotland and Ireland, to be simple - enjoyed a revival in the 1970s as a style of 'folk-rock'.  The bands and singers below mixed-and-matched, producing albums in multiple styles, varying between unadorned preservation and hot, 1970s psychedelic guitar. They drew their material from the deep wells of traditional music.


Whether Britain, Ireland or Scotland there is a store of folkloric music that has been preserved by scholars and periodically revived by performers. Much of this material is modern, from the age of sailing ships or steam engines - one can find many songs about the dire arrival of the factories. Some is historical, preserving causes and wars long passed. Shape-note church hymns, labor songs, and both celebrations and laments of common living are strung throughout. However many modern Pagans feel that bits and scraps of the kind of old lore we seek are preserved in these songs, sometimes in unlikely places. Shreds of lost English dialects, Gaelicisms in the Irish songs, and the long memory of the farmers and land-bound 'peasantry'. (... forgive me, much of this material is plainly peasant music, though there is a courtly tip) Songs of the seasonal year, planting and harvest, and narratives of spirit contact feel like they hold clues for us.

The albums linked below are core collections that I still recommend both for Pagan material, but also for general pub-singing, bardic circle performances and self-satisfaction on forest walks. It isn't Pagan music, primarily, but it is music that has inspired Pagan bards, and is being preserved folk-style in the mouths of many living singers in homes and at campfires. There's an emphasis on a capella singing and simple performances, though listen for the 70s hi-tech variants of some songs.

For your edicifation, I'll start here. This is Steeleye Span (more below), in recent years, still working. They are the paradigmatic brit folk-rock band, Featuring three or four of the artists I'll detail below, and the incomparable Maddie Prior on vocals. Yeah, it's a boogie...

The Watersons
Perhaps the single most influential album on anglophillic US Paganism is Frost and Fire, by the Watersons. The Waterson family is one of several preserving families for this kind of English singing; Mom, Dad and the kids, at this point. Their kids and grandkids are still singing today. 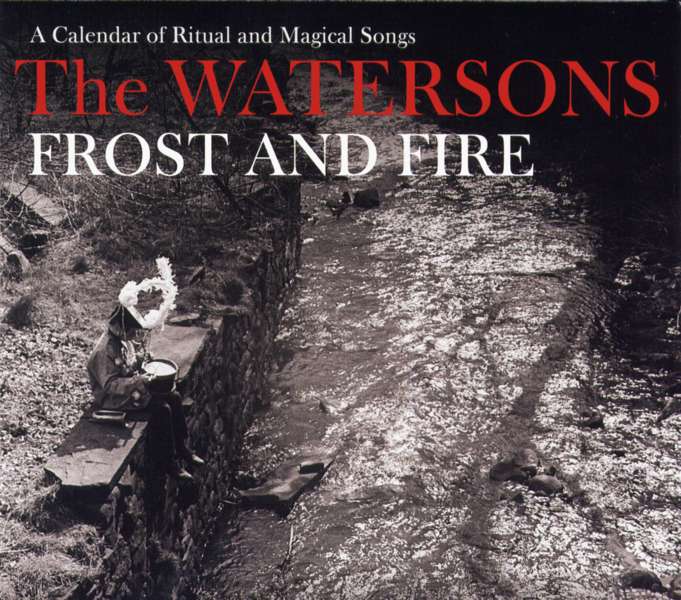 This album has a lot of folk-Christian references, if one considers the like of "Jesus Christ nailed to a big Yew tree" to be Christian. Many will recognize the May Carols, and Yule songs, and the many examples of the form and structure of folk versification has instructed many. It also offers a style of singing accessible to good singers who haven't a moment's schooling.


Anything by the Watersons will have some interesting stuff on it. The album "For Pence and Spicy Ale" doesn't seem to be up in entirety, but it has material I still use, as well as Music-Hall silliness such as 'Chickens in the Garden".


As an interlude, here's a Morris side singing a hunting song in the same vocal-group style. As is often the case, one must overlook the modern context of a fox-hunting song, and enjoy the lads singing about their dogs by their names.

The Clancy Brothers and Tommy Makem
The three brothers Clancy joined with their old friend Tommy Makem to create the sound that brought Irish folk music to the US in the folk-revival years of the 60s. Politically aware but willing to trade on  the old blarney, their singing introduced us to songs revolutionary, idyllic and occasionally drunken, though none of the lads were great drinkers, themselves.

The Irish repertoire in the US is heavily infected with vaudeville, and 'burlesque Irish' is a discernable category, in such gems as "Who Put the Overalls in Mrs Murphy's Chowder". Irish-Americans organized and fought to end the burlesque depiction of the lazy, drunken mick. Nevertheless if you, like me, are one who enjoys an ounce of the best (at a time, let us say) there are some lovely odes to the Water of Life, lots of cultural and nature references, and some good stories. Also this old material is very widely known, among folk-geeks and even those of more regular tastes.
Here's the boys on Pete Seeger's folk-music TV show, back at the dawn of TV time. Links will take you onward into the Clancy rep. The song straddles that Irish line, but it's still sung everywhere. Hang in for an Easter Egg with Pete.

Sea Shanties and Pye-rate songs
Yar, mates, tap the grog, willya? The Age of Sail, the establishment of world-wide deep-sea travels however perilous, and the creation of great national and commercial navies by the European powers led to a category of work and leisure song that is still recalled and sung. The list is uncounted, by me, at least, but here is one of my fave collections. And here's another, from the Smithsonian collections, and a third, with some more popular sing-its.

Shanties are primarily work-songs, the rhythm meant to time and coordinate work with pulleys, ropes and winches. They are ideal for raggedy, fun-time singing, and can spring up unexpectedly...


Lest we neglect the northern Gaels and Scots, let me commend the work of the seminal Scots folk band Silly Wizard. Led by the gifted Andy Stewart they adapted Scottish and Irish songs, added an instrumental element that sometimes featured Dougie MacLean on the fiddle, and introduced new songs that have sunk seamlessly into folk performance.
Fun with dialects is part of the joy of folk-music. This thick Scots brogue amounts to English, nearly...
For a more preservation playlist of Jacobite Scots ballads, go here.
Steeleye Span & Pentangle
In the early 70's Steeleye Span, a folk-rock supergroup consisting of Tim Hart, Maddie Prior, Ashley Hutchings, Martin Carthy and others created a modern sound that combined fine a capella vocals with hot electric fiddle and guitar to create a unique sound. Their first 4 or 5 albums, beginning with "Hark! The Village Wait" and "Please To See the King" including the classic "Below the Salt" and "Parcel of Rogues". This music informed the Neopagan and early festival scene, and many filks have seen these songs end up in Pagan circles.
I may not neglect Pentangle, the work of  John Renbourne and Burt Jansch, with their compatriots. Their jazz-influenced approach took a different path from Steeleye's guitar-rock style, but their influence extended to Bob Dylan, who hung with them on his UK travels.
This period of music deserves an article of its own, which I'm not proceeding to at this time. I'll leave you with a band composed of some of the children of these famous players, who are updating the music in their own way.
Sing, my friends, and be happy!