One cannot do any study of the actual ways of ancient European religion, i.e. Paganism in its original forms, without encountering the fact of animal sacrifice, and the rumor of the taking of human lives in ritual. It is undoubtedly true that human sacrifice occurred in most ancient European cultures at one stage or another. However it was never the central element of Pagan religious ritual.
Let me begin with the word ‘sacrifice’. From the Latin, it means ‘Sacred Work’; and ‘sacred’ means ‘set apart for the work of the spirits’.  While it has come to have connotations of ‘giving up’ and even of loss, to reclaim its sacred power is to affirm sacrifice as a joyous work of connection with the divine. During the work of sacrifice, many offerings may be made, of many kinds. In common language these offerings are often referred to as ‘sacrifices'. This is, in a way, a mis-speaking. To say “the sacrifice” is not to refer to whatever object is the central offering of the ritual, but rather the whole ritual of offering and blessing is, itself, ‘the sacrifice’ – the sacred work. So I find myself enjoying referring to our public Pagan rites as ‘the sacrifices’… feels nice and archaic.
Secondly, in preface, I mention that the Neopagan Druid system I work in has specifically disallowed live-animal offerings in our rites. We do make many offerings – ale and meal and bread and fruit and even meat, but we admit that we haven’t either the call or the skill to take the life of an animal and butcher it for cooking in ritual.

The basic form of larger, community worship from Ireland to India was a feast, shared with the spirits and graced with poetry and song. The best way to serve meat is fresh, and the terrible truth of the human ability to bring death to other beings required ritualization. So animals were ritually honored then killed, and their meat cooked. In Hellenic rites (of which we have written records) the bones and fat were wrapped in the skin and that was burned on the altar for the spirits. The cuts of meat were cooked and shared with the attendees. In ancient Indian fire-sacrifice it was said that the rite was not properly concluded 'until the poor had been fed'.
Smaller or personal religious rites often made offering through ‘libation’ – the simple pouring of wine, grain or other offerings on the altar of a spirit, or by ‘dedications’ – the giving of gifts of images, inscriptions, altars, buildings, even gold and cash to a deity. This form of offering was, in fact, gaining in popularity in the classical period, and even internal and native philosophies in the ancient world found reason to argue against the ancient customs of animal sacrifice. Modern rites that replace animal-meat feasting with such offerings are only expressing a Pagan-era trend.
• Human Sacrifice-offerings:
Ritual killing of political and criminal prisoners is described among the Celts. Scandinavians are said to have offered human lives before their greatest idols. Greek and Roman myths speak of youths being ‘offered’ to this titan or that monster, and the Romans specifically outlawed human-life offerings (which means that there was something to outlaw) in the years around 100bce. Human sacrifice seems to have had two major kinds, though we have no literate remains of ritual for those that I know of. (Some rites may exist buried in Indian Tantric material). First was the killing of prisoners of war and criminals. This seems to have been done en masse when needed, and to have been somewhat casual and pragmatic. We read, also, that when armies faced one another, the opposing army would all have been dedicated to the gods, so that every life taken in battle was an offering.
Personal human sacrifice (the 'virgin youth' sort) had to be voluntary. The lore suggests that an offering such as that would have been intended to 'remake the world' - to restore the essential elements of existence. Bone is given to make stone, flesh to make soil, breath to make the wind, etc. This is, I think, where the occasional claim comes from that the Druids said they had created the world.

To live in the Old Ways was, I think, to seek to live in harmony with the world as it really is. To do so, especially for those living and eating straight from the farm, would seem to require the sanctifying of the fact of death, and the ritualizing of the deed of killing. What is murder? Murder is killing done outside the laws, and without the blessing of sacrifice. So, killing for food, killing for law or religion, even killing for war - the ancients seem to have considered the power to kill to be so sacred that it had to be acknowledged and ritualized. As an exercise we might make an ethical comparison between such an attitude (and recalling that life was cheaper, in fact, in ancient days) and our own culture of sanitized, mechanized, and commoditized killing.
• The Takeaway: ‘Sacrifice” is the sacred work of offering to a god or spirit (the gods or spirits), often as offerings of food and gifts as if for a noble guest. Animal-life offering, while common in the ancient world, is not mandatory in modern work. Human sacrifice was already passing away in Pagan times, and need never be contemplated in ours. 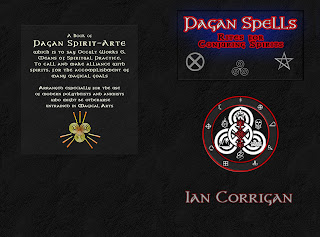 I’ve been working, for some years, on devising an approach to spirit-arte that preserves the
inheritance of European sorcery and occult tradition, while being adapted for modern Neopagan, polytheist and animist perspectives. It is common in our Neopagan movement to look to the ideas and methods of surviving world spiritist traditions for clues in how to deepen and focus Pagan spiritual work. However the direct heritage of literate, post-European occult tradition contains a large body of spirit-contact tradition, in the form of the magic of the grimoires.
The magical methods of the manuals called ‘grimoires’ are a direct inheritance from the late-classical world, a time when polytheism was giving way to fashionable monotheism, but the ancient traditions were also being preserved by hidden practitioners. This preservation would become the ‘western occult’ traditions, and would produce, much later, the ‘solomonic’ tradition of ritual spirit-contact. That tradition became, in later centuries, closely connected to both the Christian mythology and spiritology, and to an antagonistic approach to those spirits labeled ‘demons’. These elements have often turned modern Pagan occultists away from investigation of grimoire-magic.
In the past decade, new research has revealed the direct heritage of classical Paganism in the grimoire rituals and theology. This has led me to look for ways to adapt the method of grimoire spirit-arte to a polytheistic and animist mythos, with reciprocity as the basis of the work. I published a fairly detailed synthesis of the results as “The Book of Summoning”.
In spring of 2017 I cleaned out my notebooks and published a small spellbook. I soon realized that the material contained almost everything needed for a simple, sorcery-at-home version of spirit-conjuring and spellcraft with spirits. The voices in my head that serve as my self-publishing editors and consultants assigned me to redo it as a formal, step-by-step simple grimoire, adding a few charms and spells to the back-matter.
The result is my most concise instruction to date in using a polytheist, offering-based ritual system (the sort presented in my other new book “A Guide to Pagan Worship”) for the occult work of making specific alliances with spirits. Like most of my work it by-passes the ‘Golden Dawn’ era of correspondences and lodge-based ritual work. Drawing on archaic, Triadic cosmology, and a broader system of conceiving the classes of spirits I hope it can be usable/adaptable by those working a variety of ancient pantheons and cultural modes.


I apologize to those who might have bought the first edition of this (there were a number… and thanks). There is probably 20% of additional material in this new addition. I will note that almost all the text (in the original edition, and this one) is new writing, and not self-plagiarism.
Those who are interested in non-Wiccan ritual styles, drawn from the Pagan tradition of offering and blessing, will enjoy the form of the work. Much of the outline and language could also be used by those working a Wiccan-style four-quartered circle. I hope that the work helps contribute to a livelier relationship with the Spirits among modern Pagans.


Order from this link.
Lulu commonly offers discount codes. As of this writing one can get 10% off the price, plus free shipping (actually a nice deal) with the checkout code BOOKSHIP18 (case sensitive).