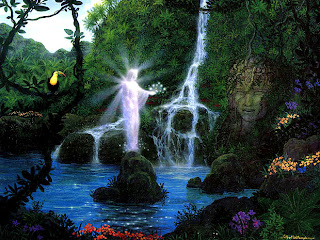 Positive feedback is always welcome. As I develop my notions about modern Pagan spirit arte I am especially thankful to those of my friends and colleagues who actually do the work and especially who tell me about it. Today I received a nice note about some results that I fell like sharing.
This woman is a long-time ADF member who has done much of my Nine Moons work as well as some of the ADF in-house training. In this email she refers to a small rite of offering and openness-to-contact that I worked as the final piece for the Pagan Fires seminar. It was very simple and general, aimed at calling all those of the Three Kindreds who cared to answer. We intended to go past simply honoring the spirits to asking them to show themselves and converse, and we got several good responses. This is the only written example, so I’ll just print it…
I leave out the name of her spirit-contact, as that’s not mine to share. Otherwise a few edits for summary.
She says:
… would just like to update you on some cool things that have happened in my own spiritual work and then also for the grove, since PF.
So first thing was the meditation you led that evening to make contact. I had kind of an intent, as part of the WG (Warriors’ Guild of ADF) StudyProgram to meet and work with a spirit that reflects that particular interest (could be animal, ancestor, god, whatever). I went in with that intent ...
The spirit that appeared was a man wearing mostly plain clothing from whatever ancient era I don't know, and a cloth cap. I had seen him before at a similar rite at some other festival or another, and assumed it was Lugh because ....I can't remember why. Although it never really felt like Lugh (could be from the court of Lugh though? Hmmm). He said his name was (***)I'm spelling it phonetically because it's in Gaelic....(***) Anyway, this is also the same energy I feel with me sometimes when I'm running or working out or whatever, so with a few questions and some later work...yeah, (mission accomplished). Woot!
We also (as a grove) do a members-only trance journey once in a while. It's so far once a quarter. Anyway, we used your 9 'categories' of nature spirits as a starter, and then went on a journey through each of the elements. Almost everyone there had VERY powerful experiences, receiving guides and insight from all 9 areas. I got a whole bunch of goodness, and two specific beings with names. (My first response post-wake up..."Great...more spirits...." :) )
Then, we honored the 9 elements in our Beltane rite. Typically we've honored nature spirits in general there (as a bookend for Samhain where we honor ancestors) and it's of course themed toward your general totem animals and such. This year I invoked and made offering to spirits of all nine elements. I wish I could remember what I said. There was a last minute kind of switcheroo, and I kind of made it up on the spot. I might be able to reconstruct it, in case you want to add it to something in the future.
Anyway, that's all. See you next weekend, and have a good day!
Very cool to see a duile summoning used in a group rite like that. Very cool to have these ideas percolating out there. Next step remains employing this stuff for more real-world outcomes, but there’s still plenty of development to do as well.  May they make a strong brew!
Posted by IanC at 10:52 AM No comments:

Yes, It's May Again

I can tell because I’m spending more time with a shovel and less with a keyboard.  Read here for last year’s post whining about having no time for writing. This year’s no better, but I’m getting to the apology post sooner : ). The good news is that the next Cthulhu Occultism post is ripening soon, and we’re about to begin some juicy magical work here that will generate some bloggery.
My last few weeks included, and will include:
• Trillium Gathering – an ADF joint in Virginia, this year well-attended and high-energy.
• Spring clean-up pre-party, we re-paved the porch, started painting, busted wood.
• Beltaine, with Stone Creed Grove, our twenty-year-plus local tradition.
• May Party coming up this weekend, and the coming-out for the new barn (see below).
• Wellspring Gathering our big do on Memorial Day.
The other good news is that L’s school-year is done the week after that and a week of collapse might be possible before prepping for June events. Busy season indeed!
In Other News
• The Leabhar Mor offer is done. I sold enough to make me happy with the project, and few enough that those who bought it have a pretty rare item.  Someversion may appear again in the future, but not that specific item.
• The next thing is a collection of my essays and posts concerning Pagan theology. I’ve nearly finished polishing the typeset, and it should be out before midsummer. Now to think of a title…
• I was pleased to have one of my books well-reviewed by my old buddy Bro Moloch, over at his blog.
•The big news around here has been the rebuilding of our barn and fellowship space. Our little farm, which we call Tredara, has been the site of Pagan gatherings in this area for nearly thirty years. Last year we began rebuilding the ancient shack of a barn that had served us well. I posted some process pics here and promised patient readers a follow-up. Since I’m again asking for your patience, I’ll post a few ‘after’ shots.
As always, thanks for reading.
Posted by IanC at 9:09 AM No comments: 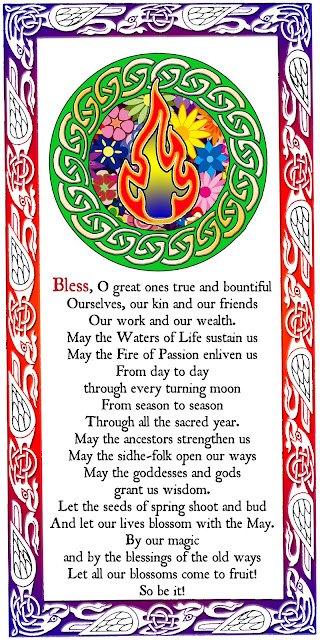