A Shrine for the Landspirits 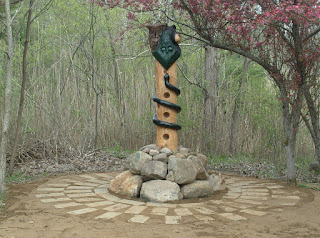 At Tredara, our 17-acre stead in NE Ohio, we have been working to build a sacred complex of shrines and worship areas for our polytheist and animist ways. Last year we arranged the construction of a Mound-Shrine for the Ancestors. To balance that we are building/gardening a glade for the many Spirits of the Land. In Our Druidry we use a conventional division of the many spirits into a triad of Gods, Dead and landspirits. BY completing this shrine we will honor the gods at our primary Nemeton fire, and have special places for the other two Kindreds.


To create the anchoring monument I sought out a local chainsaw Carver, Bob Anderson of Rock Creek Ohio. My original notion was a green-man tricephalus, but that was vetoed as 'too boring'. We decided on a tricephalus of green man, owl and bear, those being important guardian spirits around here Bob did a fine job on the piece.

A few years ago we were fortunate to be able to enlarge our property, allowing us the space for this build. The fact is that we have since had occasion to kill many plants, disturb habitat and otherwise generate for ourselves a need for frequent special offerings. The glade chosen for the shrine was an abject wreck when we arrived, filled with tires, holes and unmanaged brush. While we have been somewhat severe in our pruning and prepping, I hope that our offering of beautification and the reverence that comes with it will be well received.

I think the best thing is to show you some photos, with captions, of our work over the last couple of weekends. With the coming Beltaine season we will be doing a special rite of consecration for the shrine - I'll try to show you that as well.

With the monument complete we are working on a small path down to the small, pretty pond. Gardening with local perennial plants will follow.

We plan a consecration ritual for the Saturday of our Beltaine weekend. Human relations with the non-human world is always full of irony... we hope to get all our pruning and killing done in the glade before the big sacred apology ceremony...

On we go - let us raise up shrines and idols to the Gods and Spirits, that the land may once more be known as their home.
Posted by IanC at 5:21 AM 2 comments: 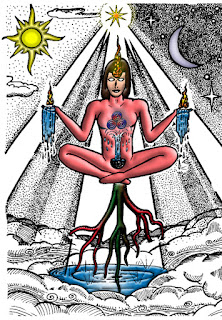 In the wisdom traditions of world Paganism and polytheism the work of ritual worship and devotion is almost always accompanied by the practice of mental training and meditation. Practices of ritual invocation and devotion are perhaps more common in the religious life of regular people. The work of training the mind, and using it in a focused way to support spiritual practice is more often the work of priests, monks and those with a formal dedication to their path. In modern practice it is my advice that all those who seek the blessings of the Old Ways will practice at least a measure of these traditional mental and spiritual skills.

There are many benefits to be gained from meditation and mental training practices. Leaving aside the mythic and ritual considerations that are the focus of this work, we can mention the psychological and emotional benefits that modern science clearly says can be gained from meditation. Relaxation, stress reduction and relief, and improved cognitive function are all results well-supported by research. In the whole realm of religion, magic and spiritual practice if you do nothing than to learn and practice meditation regularly and skillfully you will have done yourself a great service.

In the practice of ritual worship and the building of relationship with the Powers the ability to calm the emotions, focus attention and clearly visualize is vital to the generation of personal spiritual experience. It is common in modern thinking to dismiss religious ritual as ‘empty gesture’. This, I think, is largely due to the loss of these mental skills in western religious training. Literalist thinking is no more valuable to ritual than it is to scripture, and the expectation that spiritual ritual will simply “work like magic” can only result in disillusionment. Powerful, well-spoken words and meaningful, well-performed actions must be accompanied by focused, well-structured mental work for a ritual to be whole.

To be more metaphysical, it is the internal mental structures of ritual – the visualized energies and presences that form the bridge between the material symbols of the spiritual world that we use in ritual, and the Inner realities of spiritual persons and powers.  Through our well-structured mental participation the gods and spirits can step through, closer to our common lives. In the same way with our Inner Vision we can perceive and direct the ‘energies’ of Land and Sky, both in ourselves and in the outer world. Here we approach what might be called the ‘magical’ or ‘occult’ (i.e. hidden) aspect of spiritual practice. Even without such considerations the value of trance and meditative work is undeniable, and vital to ritual practice.

Spiritual teaching is full of discussion of the ‘real’ meaning of meditation and the place of ‘altered states’ or ‘trance’ in spiritual work. Sects have divided and many a scholastic duel been fought over the angels-on-pinhead minutia of these topics. I will present simple descriptions or definitions of several core terms, before we move on to practical method.

• Trance (or ‘altered states of awareness’) is the most general term. It refers to any deliberate effort to focus the mind away from the common stream of perception and mental chatter. It is characterized by the withdrawal of attention from immediate sensory environment, relaxation of the body, a strongly focused attention, and a sense of full and immediate involvement that quiets self-criticism. That is, basic trance is relaxation + concentration + non-judgement. It is possible to practice this state as a goal in itself, but basic trance is almost always the set-up for some further deliberate act of will.
• Meditation is the deliberate and maintained withdrawal of attention from the stream of chatter-thought. Meditation often employs basic trance by making that calm, mentally-motionless state the focus of concentration. Meditation of this type teaches us that our self-talk is separate from our essential self-awareness, and contributes to discernment and perspective. It helps us learn to step back from our immediate ‘programmed’ mental and emotional responses, a skill which can be valuable in dealing with the Powers. Many mystical systems have made variations of this kind of meditation one of their central practices or sacraments. To me it is one useful technique among many, but an important basis for further spiritual skills.
• Vision Pagan religion, mysticism and magic has almost always employed deliberately-constructed visualizations – the use of ‘imagination’  - to give access to deeper spiritual realities. This often involves a deeper or tighter level of focus – a ‘deeper trance’ in which envisioned scenes, images and forces mingle with sense perception. In full visionary ‘journeying’ the body may be still while the mind travels in vision. Such deeper trances are seldom part of ritual worship. However the use of conscious vision to enhance invocation, energy-work and ritual is an important part of effective practice.
• Energy-Work Modern Paganism has developed the “energy model” of magic to a fairly high degree. To a degree this is a special adaptation of Vision work, in that one is generating the sensory experiences of flowing energies, including visual models. In this notion the spiritual Powers are understood as impersonal ‘forces’ or ‘energies’ that can be manipulated by will and imagination. Many modern Pagans might describe their whole practice as about the ‘magical energies’ of the cosmos, even describing the gods as energies. While these ideas were never part of traditional ways there are several basic techniques that fit well with traditional symbols and forms. Especially ‘Grounding and Centering’, in which ‘spiritual energies’ are contacted and organized in the self, has value both as a follow-up to basic trance and as a self-healing technique.

It is sometimes argued that, in old times, community and home ritual did not include the deliberate induction of altered states of awareness. This true, and the use of scripted trance-induction in modern ritual is certainly an innovation. I argue that it is an extremely valuable one, which replaces a vital element that would otherwise be missing.

In a traditional society the rites, customs, sacred places and symbols are a part of the cultural fabric of life. With an implicit acceptance of the reality of spirit forces and human ritual the sacred things become invested with an automatic ability to produce changes in consciousness. Simply to come into the Ring of Stones, or before the Ancient Fire, or, later, into the Grand Cathedral would have been to enter a new mental space, where gods and spirits might find entry.

Moderns have no such mechanism available for our efforts to make religion in our back-yards and living-rooms. We must, I think, replace that cultural entrancement with deliberate efforts to alter awareness. The addition of deliberate entrancement and mental focus exercises to ritual works can only provide a deeper and more complete spiritual experience.
Posted by IanC at 7:24 AM No comments: