How Do I Become A Pagan? 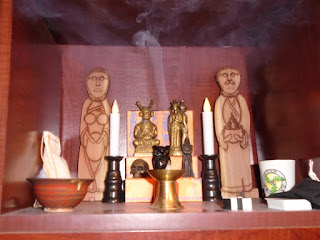 A direct question, from a Facebook Pagan group. Let me just fizz about it for a minute, and I’ll offer some direct answers.

Of course the fashionable answer, among all those who imagine themselves woke from the yoke of “religion”, is that one may do as one pleases and call that Paganism. Sigh…

In my opinion there is simply no real thing in the world that can be whatever one decides it should be. To start at that point is simply to assume that one’s spiritual work is not real, but rather a game or fancy, devised by a whim. While I suppose that might be enough for some people, I assume that when someone asks how to ‘become’ a Pagan, they mean more.

Several answers seemed to recommend a set of “beliefs” as definitive of being Pagan. Often these were very general – “believe in the Earth”, etc. Nobody seemed prepared to offer any systematic set of ‘beliefs’, which I suppose is just as well.

My own opinion is that Pagan religious participation is not defined by beliefs. Beliefs, in religion, are mandatory opinions, and modern Pagan religion has very few of them. Some specific sects may have their own little lists, but even that seems the exception rather than the rule in Pagan sub-groups. There is no organized agreement among Pagans about what ideas must be a part of a system in order for it to be Pagan.

My opinion is that in order to “be Pagan” one must be doing Pagan religious activity. Ancient Paganism was defined by participation in traditional action – in the sacrifices, and festivals and events of the local community. In ancient ways nobody seems to have asked one another what they though the Gods “really were”, nobody tried to exclude (or include) other people based on their enshrined opinions (i.e. beliefs) about the gods and spirits, or about the old stories. Myths and old tales were not mandatory objects of belief, nor taken as literal fact. Many such things would have had the unspoken presumption of fact in the local culture – e.g. “of course there are spirits – we’re just talking about what kind…”. Skepticism of cultural norms is seldom popular, but those norms were not usually codified into scripture or statements of belief.

Practice was another matter. Many ancient polytheist traditions kept ‘scriptures’ that were essentially records of hymns, invocations, spells and other specific ritual elements. The Indic Vedas are the most famous of these, but examples are found in Persia, Greece, and Rome, as well as from the city states long prior to those nations. Some ritual traditions were as tightly-regulated as any modern ideology. In Rome if an error in the traditional work was made, or a bad omen occurred one simply cancelled the rite and tried again another time.

While most modern Pagan systems don’t take such a formal approach to ritual, our ways are often defined by the practice of formal rites, in which words, symbols and natural forces combine to seek a spiritual effect. In many formal sects of neopaganism, such as traditional initiatory Wicca, or some forms of Druidry, a formal outline of ritual has been developed, that defines the sects the way a colors of a bird’s wing define its family. One becomes a part of that tradition by being taught the ritual form, and learning to do it effectively.

Like many elements of tradition this emphasis on ritual and deliberate religious action has been greatly watered-down in the post-internet Pagan world. The same hipster-philosophers will explain that we do not ‘need’ formal practice in order to interact with spirit, and that we can do ‘whatever feels right’ as we develop our personal practice. While these assertions may be true in some circumstances and for some people, I find them to be very bad advice for new students. Spiritual practice is a set of skills, and it is sensible to approach learning any new skill by following the instruction of a skilled teacher.

Both ancient and modern Pagan religious tradition is characterized by a variety of teachers, schools and methods. Modern schools tend to descend from two or three major styles of ritual work, but local groups often have major variations and specific customs. This too directly resembles the ways of the ancients. At the most individual end every household, every private altar, may have our special ways and specific beings. The gods are not jealous, and our own home ways never need stop us from joining with our neighbors for community practice.

So – How does one become a Pagan?
My short answer is:
By learning how to keep ways of Pagan spirituality, and then keeping them.

This means that it is a bit of work to actually become Pagan. You can’t do it (in any meaningful way) while reading this, simply by deciding to apply a new label to yourself. Instead you must take up the work as you would any skill, whether guitar-playing or spiritual devotion.

For some people it can be a short-cut to choose one of the public Pagan teaching groups and simply practice their ways for a year or three. Groups with long-time, tried and fixed methods can prevent wasted time by providing a coherent outline of learning. There are a number of such schools, allowing students to find which of them best suits. Some traditions of ritual and practice are also well-preserved in modern published materials.

Here’s a list of categories of work that can add up to a Pagan-style spiritual practice.


1: Good Reading. Popular Pagan publishing has a very hit-and-miss record of providing real information about the ancient ways. Find some good academic reading lists from on-line resources, and commit yourself to reading whole big, dry books, cover to cover. Look, Paganism will almost never ask you to fast for days, or crawl up a mountain on your knees… read some books!
2: Spend time in Nature. This needn’t be any fancier than you like. Simply getting yourself out of the straight lines and machine hum of human life is a teacher about Pagan spirit.
3: Choose a simple ritual form. There are choices – learn to cast a circle, learn to bless the Sacred Center, or any of a dozen similar methods in print. Simply find one you like, or write one, then learn to do it smoothly and with a sense of inspiration. Having simple ‘start and finish’ prayers can be enough, though the fact is that tradition usually prefers complexity.
3a: Consider keeping a Calendar: Setting yourself to do ritual work based on the course of the moon or the turning of the seasons can help provide an ‘excuse’ for actual practice.
4: Learn Simple Trance & Meditation. Oh yes you can. It’s like exercise – you can’t do it until you’ve done it a while. You have to just do it. If you don’t do it, you end up a couch-potato warrior.
5: Find a Local Pagan Temple. These days there are often public organizations making worship and teaching available to the general interested community. Attendance at such rites can help a solitary Pagan meet community, and work the seasonal blessings on a scale often unavailable at home.

So, life is busy, and very few people really manage to keep busy with all five of these all the time. But if your goal is to have a Pagan spirituality then trying to keep at two or three of these going in your life will keep you developing and growing. In time you will probably come to have close feelings for some Gods, perhaps know the affection and protection of your Ancestors, and deepen your wonder at the non-human beings of the spiritual worlds. In that way we hope to walk in harmony with all things, without strife.

...or fake it till you make it. I found I had to change my mindset about what a magical life should feel like internally. I became better at through some mundane practice, including meditation, even when I didn't feel it..

I think the doing of the work is more the point than whatever feelings the work produces, both at first, and whenever one finds oneself in a bored, distracted phase.

I like to say that religion, or spiritual practice, is the gym, and spirituality is the fitness that results.