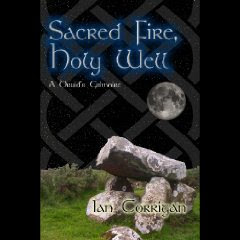 As of today my book, Sacred Fire, Holy Well; A Druid's Grimoire, is available only from ADF Publishing (though it isn't listed there, yet...), and through various retail outlets, including Amazon.com. The Amazon price is actually lower than the Lulu price, and shipping is cheaper too, so I have no regrets. ADF Publishing did a fine job moving this along, and we're still using on-demand printing, so it will be easy to make small changes if needed. Look for the cool new hardback spellbook that will be a companion to SFHW to be up on Lulu in a day or two.
Posted by IanC at 4:39 PM 4 comments: 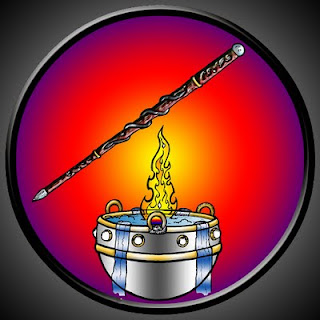 Back from Summerland festival, the last of my wacky two-month festival extravaganza. Now I must return to work on the Book of Nine Moons. My goal is still to have the first 3 months of the complete instruction done in the next few weeks, and I think I’m in reach of that.
For my own sake, and for those of you who care, here’s my progress report and still-to-do list for the first three months of Druidic magical training:
• The First Moon is complete
• The Second Moon is complete, though I feel there may be an article needed on the self-awareness work in this month.
• The Third Moon seems to require only the rite for consecrating the Cauldron of Blessing. I should be able to get that done toot sweet!
• The Fourth Moon requires instructions on working with the Inner Grove, and using the Two Powers for health and healing, and the actual trance script and rite for both.
Beyond that I haven’t even done detail outlines yet – that’s next for the fifth and sixth months.
Actually, I guess that’s why I haven’t been too worried about my deadline – I actually had a lot of the first three months done before Starwood!
So, in the first three Moons of the nine-month retreat the student will:
• Begin learning the cosmological meditative practice that is the ‘mystical’ element in this program. The first three phases will take her to the Three Cauldrons phase.
• Practice divination regularly, performing at least a half-dozen readings for himself and others.
• Begin journal work with a self-introduction and other self-awareness exercises.
• Begun the work of trance-vision, learning to step into vision and to begin finding and making the Inner Grove.
• Perform rites for personal blessing, to introduce herself to the spirits, to consecrate a talisman of protection, to create a shrine-idol for the Dead, and to create his own Cauldron of Blessing for magical rites.
Still sounds dense, but then I’ve always meant this approach to be a concentrated ‘retreat’ of the sort used by other training systems. For those who want to work diligently much can be accomplished in a short time. Even those who need to work more slowly will be able to move along one section at a time, with a clear outline.
On we go – let’s try to have the next three months done by Yuletide, shall we? Hmmmmm?
Posted by IanC at 9:38 AM 3 comments:

A Charm Upon Rising

OK, so I like writing in iambic quadrameter. I must, because I notice that I'm doing it a lot. I'm getting back to work on the Nine Moons, and noticed that while I prescribed a morning gaelic-style water-pouring, I had no text for it. Here is one, vaguely based on themes from Scots morning charms, but set firmly in rhythm and meter, as I think Druidic charms ought to be. It's ultra-simple, but that seems proper for this equally simple custom, and since it's followed by actual shrine work.
A Charm Upon Rising
To gain the blessing of the day, take fresh water to the eastern door of your home, and pour it outside the doorstep, saying:
Thou Shining Ones of Moon and Sun
Oh Mighty Ones who guide our way
Oh Noble Spirits, every one
Guide and ward me on this day

Let me walk in wisdom’s light
By virtue, strength and love’s own way
My word and deed be true and right
Keep and teach me on this day

Oh Fire and Water shine and flow
By Sun and Earth I greet the day
Take you this gift now, as I go
Along my road, my path, my way.
Posted by IanC at 8:37 AM 1 comment:

A Charm for Lughnassadh 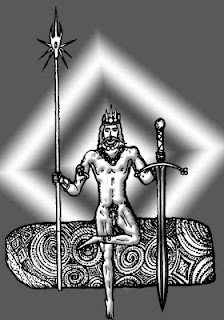 The Lughnassadh Charm
Feast of the Bright One, Rising!
Corn Growing,
Peace Reigning
Oath Taking,
Comes Reaping
I keep the
Feast of Lughnassadh!
Lugh Samildanach,
you I call
Master of All Arts, Wanderer and Trickster
Hound-God, Raven God
Take now this offering here at my Fire
Lugh Lamhfada, you I call
Spear Bearer, Young Hero
Throne Winner, Giant Slayer
Take now this offering here at my Fire
Thou Lugh the Champion
Lugh the Crowned One, Lugh the Skilled One
Beneath the circle of your Shield,
I give you this due offering
Land grow ripe and full and gold
Beneath the Sun and the Thunder
Peace among folk,
Wisdom, strength and hospitality
Join my heart with the Folk and the Land
In the Blessing of Lugh of the Spear!
So, all you Powers, I give you welcome at my Fire. Let your light be reflected in my spirit, let your ale flow in my veins. I raise this glass to you, and drink to your divine power. Let me know the health, wealth and wisdom of the Gods and Spirits on this holy feast of Lughnassadh! So be it!

Work on a high place if you can, perhaps a green meadow. Offerings of ale, bread fruit and oil are proper.
Posted by IanC at 1:39 PM No comments: