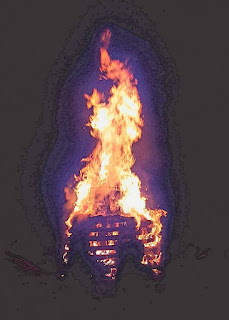 Starwood 36; 2016
So, not a ‘review’ or even a puff-piece so much as my personal impressions and musings. Moral of the story: come to Starwood.

Bam!
My joke at the end of the event this year was that the five-hour drive from our organizing center to the site requires us to bring the event in what amounts to a pop-up can. We arrive, pull the tab and the event inflates. If only…

This year’s Starwood Festival, the 36th annual, saw a new stage of growth and maturity in the on-site management. Our ‘maturation’ has been anything but a straight-line process, with various side-steps along the way, and presently we’re growing out of our move from a site of twenty years to a new location. That has meant redesigning our program spaces and materials use, usually on an as-arrived, ad-hoc basis. After all nobody pays us to do this stuff. This year we got it right. Our new wave of volunteers has solidified, our understanding of the required logistics is clear… why, it’s almost like we knew what we were doing!

Hot weather punctuated by short but exciting thunderstorms kept the clothing to a minimum, with clothing-optional temperatures from dawn ‘til dawn. Wisteria has made a major improvement in roads and paths, and the rain produced far less slippery mud than previously; kudos to the camp for ongoing improvements – better showers, improving electrical, etc. I believe this was Wisteria’s 20th anniversary as a self-invented intentional community and business, and that feat alone is worthy of applause.

But enough in-house musing – it was a great Starwood! Efforts at budgetary control meant that we spent a bit less on our main stage, but there was no shortage of music, both there and at two smaller stages. Most days say lunch and dinner concerts at the kitchen and tavern venues, and a main concert in the evening along with scheduled side-jams. Yes that’s right – the Green Man Tavern is restored to us, this year with a selection of craft-brews from Athens’ brewers. Happy hour was consistently happy.

Overnight temps in the high 60s meant all-night clothing-optional living, and the Drum-Fire in Wisteria’s Paw-Paw patch rocked all night, every night. Located down in the dell the drums aren’t deafening for most camps, but it’s so nice to sleep to the rocking roll of the rhythm… ah yes… This year saw the return of some classic drum-fire personal, making it a particularly good year for that end of the festival.

Our workshop list continues to offer everything from sorcery to sustainability, to art & music, from this year’s progressivism to high-concept speculation on the future. I was very pleased to be included on a panel with David J Brown, Oberon Zell, Phil Farber and Harvey Wasserman discussing the future of consciousness-arts following the legalization of cannabis. One of my goals for the next years is to bring equally high-level occult and Pagan programming back to full-measure. At our thirty-sixth year we have suffered some attrition, with kinsfolk like Isaac Bonewits and Margot Adler traveling on. We have spaces to fill, and a platform to offer to new voices.

The ritual menu was also reasonably full, though the Druid sacrifice was rained out (yeah, well…)
and we couldn’t wangle a Gnostic Mass (OTOites, we wanna help). The Alchemical Fire, as designed by Magnus McBride, is becoming a fixture of the event, and the Labyrinth provides an unstructured yet powerful contemplative opportunity. Workshop-based meditations, healings, gongings and other para-spiritual activities rounded out the offerings.

I was pleased with my own activity this year. Having extricated myself from much of the physical labor I was able to concentrate on my program elements, and things went well. I did my two-parts on Pagan spirit-arte which were somewhat more raggedy in the woods, without visual support, and in 75-minute slots, but seemed well-received. L. and I performed twice, once in the café and once in the tavern. I was able to take some control of my schedule this year; I appreciate when the team views me as top-o-the-bill and puts me all on Saturday, but these days I get rather worn by the end of my 9-day woods fun.
The Starwood Bonfire has been the trademark of the event since year one. It is simply true, if immodest, to say that Starwood helped to invent and develop fire-and-drum-circle culture, inspired heavily by that first big fire on Saturday night. Over the years, as Starwood has grown and receded with economic tides, what began as a hot fire-party for 200 turned into a wild carnival for 1,000, with a stack of wood as big as a house. As we have settled in at Wisteria we have been looking for the right combination of size and activity to hold on to that wild spirit as the years pass along.

This year we did pretty well. The fire was scaled back in diameter, but I noted that the central stack of the three-tiered fire was quite tall. The fire-tribe has worked for years to develop fire-models that fall safely inward and downward, and that makes a 25’ center-stack possible even in a smaller fire. This year’s fire blew up real good, as usual, and then produced a footprint that allowed the crowd to approach and dance without being roasted. We’re still developing an entertainment model that allows some ‘performances’ that don’t interfere with the general dance, but we had a good night, ending with the miraculous pancakes of dawn.

Starwood is more than just an event created by a committee, it is, or contains, a culture that has grown by its own life inside the event. Fire-tribe, Palace, Druids, people bring their own seeds and grow them in our soil by the light of our fire. One of the most central of these magics is the work of making the Torches that are used to light the Fire. This set of customs, and the crew that support it, grew from the attempts of early years to craft effective and safe carry-able torches. Many experiments were made, and many a torch-head dripped flaming oil, or went out in 7 minutes, or burned through and fell off like a match-head. Finally the current formula of paraffin-soaked terry-wraps was devised, and it produces some of the steadiest and most reliable torches I have seen outside of the movies. The custom has become to name each of the eight-plus-one torches by a certain virtue or power of desirable thing, and this provides a unique flavor to each year’s enchantment. This year’s torches were named Healing, Integration, Love, Perseverance, Flow, Transcendence, Wisdom/"Adulting", Slack and the Master Torch, from which the others were lit, was Grace. By that spell we bless these good things into us all.

Grace is a funny word, one with accumulated layers of meaning in our English tongue. In Christian theology it is used to describe ‘unmerited favor’, such as the gift of salvation, given whether we ‘deserve’ it or not. I prefer an older meaning. Grace refers to the natural and undeniable presence of beauty, true form, and balance, and to our experience of those things. The two definitions are not unrelated. We do not need to ‘deserve’ the beauty of a sunset or our delight in it – they are given to us freely, regardless of our ‘moral’ condition. The Three Graces of Hellenic Paganism were named Aglaea ("Splendor"), Euphrosyne ("Mirth"), and Thalia ("Good Cheer"). Splendor, Mirth and Delight – what three things can better describe the lighting of the Starwood Bonfire, and the all-night revel that it illumines?

So we emerge from this year well-recharged and energized for coming organizing. On we go, my kin! Thanks to all, and remember: We All Do It Together.
Posted by IanC at 8:04 AM 4 comments: