To Limit the Divine

OK, am I little cranky this morning? Perhaps. This is one of those general statements of things-I-think, whorth exactly what its worth...

I tend to doubt cliché wisdom. Much of what passes for common-or-garden, bar-stool spirituality isn’t worth a crap, really. “All is One” So fucking what – hammer that nail with this cheese. “The Universe is mental – my mind makes reality”. Look out for that bus... One oft-recited nostrum is that one cannot or must not “limit the divine”. Allow me to dissect…

My first assertion is that limitation is absolutely required for real existence. Limitation is identical with definition. It is the edges that define – the limits. That might be band-width limits, conceptual limits or material limits, but all things, material or ideational are describable and definable because they are limited. If there could be things not describable or definable, we don’t (couldn’t) know of them.

My second assertion is that the divine, or spirit-world, is a part of the natural system, a segment of the whole cosmos. I expect the spiritual to reflect the material, and vice versa – as above, so below, etc. Thus I expect real divine things to have limitation, boundary and definition. Since I dismiss the notion of ‘one God’ I can dismiss several philosophical quandaries that come with it. As a polytheist it makes sense to me that the divine part of nature contains many persons, many beings, each defined by their limitation (or limited by their definition, as ya like). Odin isn’t Aphrodite isn’t Orpheus – the gods are the gods.

Let’s look at limitation in another way. One of the most reliable means of increasing power is through limitation. If you want that water to turn a wheel you must limit it to a channel cut in the earth. If you want those electrons to flip a switch you must limit them in a properly-connected wire. Even were one to posit some oceanic all-consciousness-style godhead, it would have to take more limited form in order to be at all present in the world. Even in monistic religions (not in monotheistic ones) the divine manifests as the many persons of the gods.

So, when a modern Pagan undertakes to make real contact with the divine in the person of one of the gods it is reasonable for us to approach the god in a clearly delimited and focused way. This is the merit of using a formal shrine, of making a throne, a specific locale in which you ask and expect the power of the god to manifest. This is why it is valuable to make sacred space – to say “this space is different, separate, and specific”. The essential mechanism of formal theurgy is the manifestation of divine power in the idols and tools of the magician’s shrine. This is made possible by the creation of a narrow channel – by the skillful application of limitation. The proper image, properly-colored gear, proper offerings and incense, all create a narrow symbolic channel through which the divine power enters the material world.

So I would say that the work of limiting the divine is central to really knowing the divine. Like any real knowledge, some knowledge of the spiritual world must be acquired a piece at a time, one being at a time. To know the forest is to know each of the trees. We set ourselves to meet the god and spirits through our efforts, counting on their good will and our good method to allow the meeting. By providing a limited channel for the divine, we make it real in the real world, and greatly increase our chances of generating real blessing.
Posted by IanC at 7:22 AM 4 comments:

In Praise of the Court of Brigid.

I just received word from one of our ADF students, Davin Mac Lugh, about results he obtained 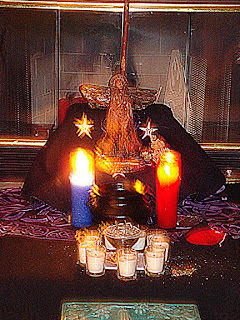 working with one of the Court of Brigid spirits. It’s going slowly, but a few more magicians each season are taking up the work.


Do head over to his blog, The Druid of Fisher Street, for the whole story. I liked his closing:

As in this experience, my hard science mind told me that he would most likely not survive, and yet he did! So something must have intervened, and that something was most likely the spirit I called upon.  So long as the hard sciences cannot in some way measure magic they will not accept it.  Honestly, I am ok with that.  I hope they never can measure it.  I hope there will always be forces in this world that can’t be understood with measurement; forces that must be felt and experienced and always leaving us a bit lost as to how it worked.  This is the re-enchanting of the world.  This is how it is done; one magical working at a time.

May the Blessings of the Goddess Brigid continue to flow into the world through her Courtiers!
Posted by IanC at 6:00 PM No comments:

Yes! I walk by day… at least some days… days when I haven’t walked with whiskey until some unwholesome and unholy hour with equally whiskey-soaked Druids and Pagans. Then I only walked by afternoon.
Yes, fellow kids, it’s been such a looong exposition. I did finally get my new little book out, and have a next project in the pipe, but for now I think I shall just rant on a while. 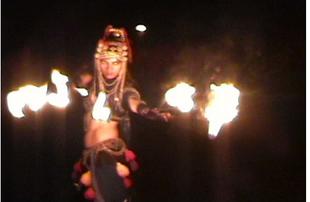 • Starwood - Our round of non-stop action began with Starwood, the 33rd year of the fest I helped to found and organize. It was a good year, a little under-attended but very juicy for me. We upped our game at the midnight ADF ritual by making and burning a shrine-house just for the occasion. The OTO was back at Starwood for the first time in decades, with a performance of the Gnostic Mass. The team busted their hump to bring in a full temple and team, and it was an excellent performance. L. and I worked the Dagda Audience, and did two concert performances. We were especially honored to be part of the opening act for the Thursday night Celtic Band, Dulahan. Starwood rocks on – be there next year!

• Portland, & Eight Winds – We decided to make gathering of ADF’s western Region, the Eight Winds Festival. This year it was held at the home of our Archdruid, Kirk Thomas, at Trout Lake Abbey. The Abbey is the shared premises of both Kirk’s Druid Sanctuary and of his partner’s Buddhist monastery and temple, so it’s a very cool vibe, set near the Columbia river gorge in southern Washington state. The event was delightful – intimate, focused and renewing.

We also arrived in the region a couple of days early, on Monday evening, to do some tourism in Portland/Seattle. Arriving on Monday probably wasn’t the smartest choice, since we wouldn’t be in the region for either weekend, and there just isn’t much to do on Tuesday night, even in Seattle. We did manage a whirlwind bookstore tour of Seattle, being especially impressed with Edge of the Circle Books. I was sorry to miss meeting the boss – bad scheduling again. 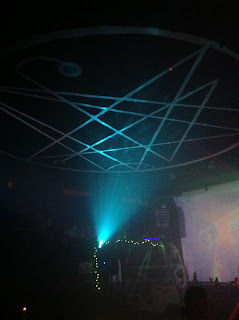 In Portland we did manage to get to the Lovecraft Bar, just in time for the dance lights to go on so that I couldn’t really scope or snap the décor. Cool joint though – giant arra-agga-bandar on the ceiling, skull-totems, and walls covered with classic movie stills and pulp illos. Once again, I missed the boss, though even the barman was a fan.

Next day we went to Powell’s Books, called “The World’s Largest Booksore”. I believe it. Three stories of a full city block, with a satellite building. The ‘occult’ section was better than most modern Pagan boutiques (who can’t really make a buck on books anyway). Only the airline luggage limitations preserved my self-control.

Fortunately one touristy thing did start on Wednesday afternoon – the Oregon Brewers’ Festival. Eighty one, yes 81 taps, each representing a local or national microbrew (one from Ohio). Live music, summer heat and a copacetic crowd – my idea of summer fun.

• Lughnassadh - While we didn’t actually travel beyond our back-yard for this, it came so soon after the last travel, and we spent so little time at the house that it felt like another event. We host a weekend of light-weight games, music, crafts etc. This year was a bit underattended in the Saturday phase, but we had a nice crowd for the rite on Sunday afternoon.

Working Our Burros Off.
Recent readers will know that we have acquired new acreage here at Tredara. Despite our travels, we wanted to get a few things done for our Lughnassadh Gathering. Especially, we wanted to finish a road from behind our barn, through the swampy part of the woods, and up into the new areas.

It’s been a wet summer here, though cooler than the last couple, but we began the work on the road in nearly 90 degrees, the day after a punishing rain. The woods were quite flooded, which did have the advantage of telling us just how high we had the build the road. In a couple of sessions with friends, and some other days of humping it along with just L and I, we moved some eighteen tones of gravel and built maybe eighty feet of hard road. All in-between the above travels; I’m not so much bragging as whining…

On the morning of Lughnassadh weekend our local mechanic (who seems likely to be a treasure) got our new ancient tractor started, and we were able to begin serious mowing. The brush-hog does it all, and AJs mower-mania meant that a lot got done fast. We were ready to camp folks at ‘the top’ (the new patch is significantly higher and dryer…) by Friday evening, which had been our goal.

Likewise, the shower on the back of the barn is done! A few sturdy folks used the shower over the weekend though, so it’s tried and proven. Now for the on-demand hot water.

We don’t quite know what it’ll all be yet, but we’re building it!
Coming Up
• Summerland Gathering Down in the lovely Yellow Springs area of Ohio. One of our Fave events; we’ll be working the Audience With the Dagda for the third time. I think a Court working for the Big Fella is going to be in order.

• Midnight FlameFestival way up in the tip of Michigan’s lower peninsula. This will be our first trip to see the mead-hall of Grove of the Midnight Sun. I’ll probably be teaching, but don’t know what yet.

• Genius LocusWork: L. and I will be working the next phase of the work during this waxing cycle. I’ll try to write something up.

Things should liven up here on the old bloggo as we move into fall. One more general Cthulhu background article, then reviews. More occult journaling. Thanks for reading!
On we go!
Posted by IanC at 4:02 PM 1 comment:

I've finally completed the collection of theology articles from this blog. For regular readers I must warn that it is precisely collected articles from here - nothing you haven't seen. It might still be useful as something for Mom to read, or to sit in waiting rooms ; ). If you want a hard copy, you can get it here. 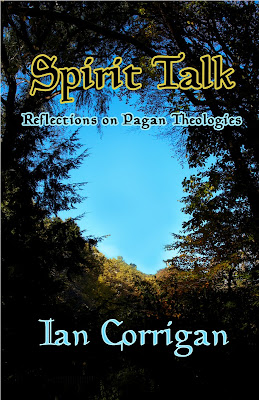