Magic isn’t about products. This basic truth is often repeated on the internet, in between waves of advertising for occult products. But it’s true – the effective work of magic does not rely on cool stuff, whether blades or jewelry or books.
Ah, books… I admitted I was powerless over books, and that my shelves had become unmanageable…
Nevertheless, books are, for many modern occultists, the real gate and road to learning magic.  Personal teaching is rare to locate, and rarer to find without strings attached – books respond as reliably as they are used. Certainly if more students actually did what the books told them, we’d have more competent magicians. But, I’m already rambling.
In my own desire to own the sort of books of magic I imagine, I have produced collections of my own rituals and spells, most notably the Leabhar Mor  (”Big Book” in Irish) a full-sized Wizard’s Tome which I have made available over the years. I love the copies I have, and it did fulfill some basic “I want a wizard-book” fantasy. The big book on the podium in the library or ritual room is one of the core images for me.
But there is another facet to the archetype of the Magical Book. So often in recent centuries magic has been “forbidden knowledge”, either frowned-upon socially or actually outlawed by authorities, and suppressed by violence. From another angle there was a long period in which books themselves – each book – were treasures. Paper, even parchment, was rare and valuable, and the skill of bookbinding produced items that were intended to be of lasting value even when not embellished with gold and gems. So some books were intended to be concealable, or as handbooks on a busy workbench, or as a light load for a scholar’s luggage and might be bound in small size… the ‘octavo’, or even smaller. Prayer books and missals were commonly bound so, as were grimoires and books of sorcery.
In my very own head, where all the attics and shadowy glades of my magic are found, two fictional models of powerful occult books in small sizes stick out. The first is the curious cypher book in John Bellair’s “The Face In The Frost”, which fascinates the attention of a sequence of scholars and magicians, and the Book of Calls, from Fred Mustard Stewart’s “The Mephisto Waltz”. Both were written in such a way as to present a powerful (and spooky) book of magic in a small, portable, concealable way.
So I was quite pleased when, at last, Lulu.com began offering on-demand hardback books in their ‘pocket book’ size – the size of the old standard paperback book. As usual Lulu’s standards for their work are good, and the experimental copies I’ve received are holding up to some carrying and use. They offer only a couple creative options in covers, but I’ve done something I like… 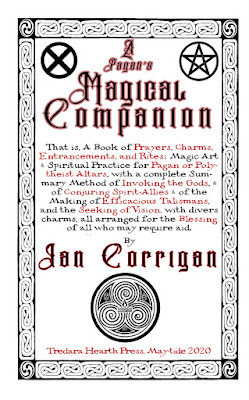 The Pagan Magical Companion is my effort to assemble a hand-book of modern Pagan magic and spirit. It contains material mostly written since the compilation of the Leabhar Mor, along with some repeated material, tables, etc, which I thought necessary for a useful portable reference. My intention is to create a book that is useful to the working magician, as well as inspirational to those pursuing Pagan spirituality.

The book begins with material useful in beginning and maintaining a simple house-cult of local gods and spirit – which can be the basis for a lot of more esoteric magical work. The book presents a method of formal theurgic invocation of the gods, and offers a model for using it in context of a yearly cycle of seasonal rites.

In this handbook format I have not included articles of technical explanation of basic magical methods, such as trance-vision journeying. I do present a ritual framework that can help unite vision-journey workings with one’s larger ritual-magic practice, but the method will have to be acquired by the reader. Likewise divination is discussed, and some simple methods given, intended to be especially useful for the magical rites described.

Central to the book’s magic is the Pagan system of spirit-arte it presents. Based in my research and experiments over the past decade, here I have tried to boil-down and present the method in an easy outline that can be worked with a few proper tools. The work presented in the book includes all the needed rites for making the tools, preparing the mind and opening relationships with the spirits. With those things in hand, spirit-arte is the next logical step. The book contains a set of rites for making basic alliances that can serve for practical magic of all kinds.
Finally I collect a set of experiments based on the book’s methods, along with many one-off charms and ‘prayers’ for a variety of spiritual and practical purposes. These needful charms help make the Companion a source of inspiration and support through our common lives.

So the Magical Companion is available now at my store on Lulu.com. It is a pocket hardcover, the cover image-printed on gloss (which I find more durable than their matte stock). It is printed in full color on sturdy stock, with red and black text throughout, and many color illustrations and plates. I find it has a satisfying heft while suiting the desire for a portable resource. 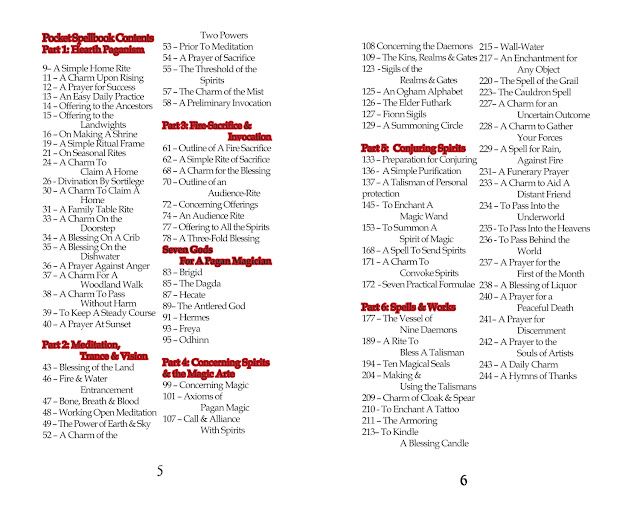