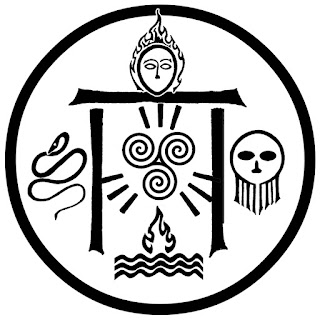 The second of two new Druidic sigils or lamens that have gotten a bit of traction out in Pagandom. Posted largely so that I can reference it, and in case you've wondered what your buddy's t-shirt means...

The Druid’s Gate is a telesmatic design shown by inspiration to Ian Corrigan – an expression of the core ritual power of Druidic spirit-magic. By bringing together symbols of this entire complex we create a figure filled with power and awe for use in further magic

At the base of the figure we see the sigils of Water and Fire. The Primal Powers, reflecting the cosmic powers of Earth and Sky, Underworld and Heavens. From the Two arises the Three, and the Triskelion might represent the Three Worlds, of Land, Sea and Sky, as understood by the ancient Celts and their Druids. In this triskel the sacred Center, the Place Between is held by the ritual fire. By bringing these powers together a liminal place is created, neither/nor; the Boundary Between; and above the combined fire and water the Gate appears. I might have chosen to express this ‘crossing-place’ as a cross-road symbol of the usual sort, but chose instead to harken to the truly archaic forms of the stone trilithons and gates of the pre-Celtic world, which were mysteries even to Druids. From such gates Otherworld beings emerged.

And so we see the sigils of the Three Kindreds of spirits emerging from or arriving at the gate. The Flaming Countenance of the Gods, the Skull of the Dead, and the Serpent to represent the power of the Landspirits all appear surrounding the Gate and the Center.

So this synthetic glyph manifests the proper order of Summoning, that the gate arise from the Between, and the Spirits come to our presence through the gate. So to display the sign, properly enchanted, is to declare one’s place as a Keeper of the Ways, a person to whom the respect of spirits is due. 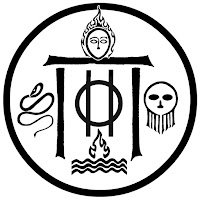 Because this is the internet age, you'll find occasional products branded with this symbol - t-shirts, cups, gee-gaws, etc.
I should note that the ADF clergy order has adopted a variant of this seal as the symbol of our Senior Priesthood. You'll see priests of that rank wearing this variant as we please, on raiment or jewelry. The variant with the triskelion remains my own, the variant with the ADF sigil is used for the Senior Priesthood... just to be real clear. 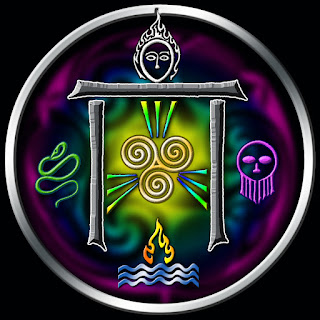 Fire and water, shine and flow
Meet and Join, above and below
At the Sacred Center, stand
Sea and Sky, and Holy Land
Gods and Dead and Spirit Kin
By this sign, now, come ye in
By these Holy Powers all
Open the Gate! I make the call!
Posted by IanC at 9:54 AM 2 comments: