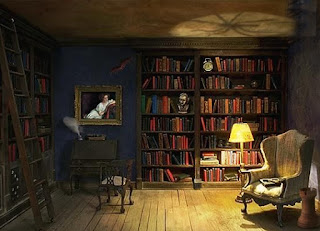 Out on the Internet there is a constant clamor by new students for direction, advice, and first-steps maps of the route into Pagan spirituality. It remains simply true that reading books is the primary door to Pagan ways. The ever-flowing streams of modern Pagan books can  be, in turn, puzzling for new students.

So I'll do another archival article, setting down my recommendations for a basic reading list. This list is focused on general-purpose Paganism, neither Wicca as such, nor any specific ethnic or reconstructionist path. I've tried to keep it practical - most of the titles give ideas and instruction on actually doing Paganism home and life. The list isn't about magic and occultism, though several of the listed titles give good instruction. Rather it concerns Paganism as spiritual and religious practice in personal life.

I might suggest reading one title from each category for a start, then working through the rest.

A: Survey and Background Two books that introduce general concepts and outline major traditions and styles of Paganism
1: The Path of Paganism; John Beckett: Beckett is a UU member and  Druid. His book introduces basic concepts of Pagan ways such as Sacred Space, Gods and Spirits, and the Seasonal Calendar. Very cross-traditional, well-thought-out and readable.
2: Pagan Paths; Pete Jennings: A survey of multiple named or nameable Pagan systems, paths and traditions, including witchcraft and Wicca, Northern Mysteries, Womyn’s Religion, etc.

B: Non-Wiccan Basic Paganism Three books that teach broad basic themes and practical approaches.
3: Basics of Ritual Worship; Ian Corrigan: A simple method of establishing home altars and shrines, beginning work with the spirits of nature and the gods, and establishing one’s Paganism in one’s life.
4: To Walk A Pagan Path; Alaric Albertson: Covers much of the same material – home temple, family ritual etc. Albertson is a Saxon Pagan, and the book has that slant, but is widely applicable.
5: A Book of Pagan Prayer; Ceisiwr Serith: A huge compilation of original prayers and invocations for Pagan worship. Most of the Prayers could be used in almost any traditional context.

D: Eclectic Wicca and Paganism: In the 1980s, Pagan festivals and public groups developed an eclectic style of Pagan ritual based loosely on traditional Wicca. Many modern ‘Wiccans’ work in this style.
8: Wicca, A Guide for the Solitary Practitioner; Scott Cunningham: Simple instructions, few rules, little connection to tradition, but very accessible, very doable. A book that changed the movement.
9: A Book of Pagan Rituals; Pagan Way (credited to Herman Slater, falsely): A full round of lunar and seasonal ceremonies designed for solo or small-group practice. This text has created countless small Pagan groups.

E: Non-Wiccan Witchcraft: ‘Witchcraft’ is a broad and indistinct category, and Wicca is far from the only style of it. I’ll include one good book, which will be made easier to understand by the other reading here.
10: Treading the Mill; Nigel Pearson;  a grimoire of English traditional Craft-style work. With rituals clearly related to those of Wicca, it brings a greater attention to the field and forest, to landspirits and ancestors.

F: Traditional Euro-Paganisms: Many Pagans find inspiration in a specific culture, such as Irish/Celtic, Hellenic or Norse.
11: Sacred Fire, Holy Well; Ian Corrigan: A review of Irish Gods and myths, with a full, non-wiccan style of ritual, Seasonal rites and works of magic and vision.
12: Hellenismos; Tony Mierzwicki:  Introduction to the Paganism of ancient Greece, home worship, invocation of the gods.
13: A Practical Heathen’s Guide to Asatru: Patricia Lafayllve: Norse Paganism is one of the most popular traditional paganisms today, and this presents a simple introduction.

I'm very pleased to be able to announce the public release of  the  Hearth Keeper Way, a new expression of basic training in modern Pagan ways as understood in ADF. You can download a free 94pp book, offering complete instructions in the basics of home Pagan worship, here.
In it we teach a method of establishing a home devotional and spiritual practice based on a polytheistic and animist view. We offer outlines and support, and encouragement to customize personal work according to personal need.
If the links here don't work, the PDF is at  https://www.adf.org/system/files/public/training/the_hearth_keepers_way.pdf

ADF is one of the formal Pagan 'church' organizations. We have a cost for membership, collect donations at local rites, and in turn rent actual community locations for Pagan rites. We are working to build Pagan spiritual institutions that will survive our current generation and carry the work into the future.

As a result, perhaps, we have had a tendency to retreat behind the pay-wall of our membership. It is fair to say that we have always offered a thick file of free material on the public portions of our web-presence, and of course ADF local public rites are free. Our training has always been members-only. The Hearthkeeper Way is ADF's extension of our training - a gift to the Pagan community.

And building a personal practice is what the method is about. While the guide offers some pre-packaged ritual speech, outlines, etc, we know that individual home altars will grow and develop in individual ways. All of ADF's traditional advice and game-rules may apply - Indo-European focus; one-culture-at-a-time preference, hard-ish polytheism and spiritism, etc. The org has barely ever policed such things for our Groves - it will not (I predict) attempt to do so for Hearths.

It also represents development in ADF's vision and the implementation of our vision. Founded strongly around the notion of local Pagan ritual-group congregations - "Groves" - the reality of post-internet Paganism has produced a large percentage of solitary members, whether by circumstance or inclination. The Hearth Way is a new support for solo and family micro-group Pagan practice, and we hope it will encourage folks who wish to identify as Pagan to build an effective home practice.


On another level the creation and content of the HKW marks a coming wave of ADF leadership. While I can fairly say that the notion and preliminary outlines were mine, the text as we offer it is new material, and in no way a re-tread of previous text. They younger leadership handled the matter with very little input from me, and that is, itself, a marker of the progress we're making toward transgenerational survival. May wisdom be increased!

I encourage you to have a look at the PDF (which is still in some need of some editing, though complete). We offer these methods in whole, or as a vocabulary of ritual forms to be made into the poetry of your own Hearth-Paganism. May it be a blessing to you!