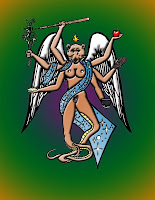 The topic of the 'Third Kindred' has been a lurking elephant in our big room since we took up the conventional 'Three Kindreds'. I think it is an unsolved problem of lore and even worship in our mix, and I am interested in how it goes when members take up actual efforts to include the Others in the work.

I think we come to our ideas of the Third Kin with a couple of half-formed notions from modern times that may hinder us from understanding what the ancients meant.
• The post-Theosphical idea of 'devas' as the spirits of plants, stones, etc is at least a step toward animism, and so perhaps in the right direction. The use of the term 'fairy' for the twee artistic constructions connected with such things has muddied the water badly, in my opinion. Even using 'deva' to mean small spirit instead of 'a god' has created confusion.

I couldn't prove that the ancients held this level of animism, viewing every individual plant and animal as a spirit. Though, customs such as leaving a coin in the hole or 'hunting' the plant do suggest concern about an individual spirit. I think it's safe to suggest that some degree of ground-level animism was part of the IE worldview.

But when we talk about the 'Nature Spirits' or 'Landwights' I think we may be limiting the category too strictly by focusing on this model. Let's look at the second problem notion:

• Popular ideas of 'Power Animals' and 'Totems' based in American and central Asian shamanic cultures have also been a gateway into animism for some folks. However some of the ideas that have built up around 'core shamanism' and its even-newer-age successors, as well as the fictions of Castaneda serve to limit our understanding of the Third Kin.

In IE tales we don’t very often see beasts speaking for themselves. We fairly often see various gods, heroes and other spirits choosing to assume animal forms (or having them imposed upon them). There is some notion of ‘clan animals’ in some Gaelic clans. Both Bear Warriors and Wolf Warriors may have existed in Celtic or Germanic societies, but we should be careful not to lump these into some vague idea of ‘totems’. It seems to me that in the tales the appearance of animals is m 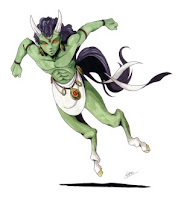 ore often a guise of some other sort of spirit than a visit from a ‘spirit animal’.

On the other hand, I think we can discern several things from ancient tales and lore that are important to an ancient understanding.
• First, there are whole categories, or races, or species of beings that are not the spirits 'of' material things, not are they Deities, in the sense of the Eldest and Mightiest, though the greatest of them may be 'shining ones' in fact. We hear of centaurs, and satyrs, of tree-nymphs and pool-nymphs, but also of Ghandarvas and the Dancer Women, and the Night-Hags. We have medieval legends of the Court Under the Hill, trooping and processing hosts, etc.
• Second, a great deal of medieval and even Pagan description of the 'wights' mixes the Dead with non-human kindreds freely, as if the Dead join the category. The Alfar of the Norse are often understood as Ancestors, but the Liosalfar (light-elves) are one of the 'races' of otherworld beings.

My continuing-to-evolve understanding of the Hellenic idea of daimones suggests that the category included both a variety of non-deific, non-human spiritual powers, and at least those we might call the Mighty Dead. We see a very simple, non-triple division of the Powers in 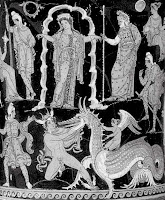 Irish lore, when they refer to "De agus ande" - the Gods and the not-Gods.

So when we talk about mobile or immobile wights, we certainly have a wide variety of possible behaviors of the spirits. Some will have been stationary. Some will have been, or become, family allies and have come with the family to a new land. Who even knows what beings involve themselves in mercantile trade. Dreams alone would be enough to transfer a spirit from one land to another, in my opinion - they're tricky that way.

Our practice, then, can include efforts to approach any or all of these categories. I think lore makes it clear that to keep one's luck and weal one should be at peace with the spirits of the soil and green and local spirits. I think our offerings as we do them now are pretty well focused on that sort of work. In traditional lore there are also local cults of greater spirits – various local ‘gods’ of the forest or shrines to a specific non-deific, human-animal hybrid or spirit-tree beings. Many times these special shrines and rites are focused on magical goals – healing, fertility or wisdom. We’ve been nowhere near dealing with this sort of being yet, and I think there’s a lot to be gotten from the effort.
Well, this has been a ramble, but it's a complex topic...
Posted by IanC at 7:11 AM

When working with any of the Kindreds as a group, I tend to focus upon the qualities of that Kindred and the function that it will play in the religious/magical work. Then, I feel the door is open to the beings that have the appropriate attributes and affinities to join in the work under the guise of that Kindred. This means, a being who could possibly fulfill the role of a Nature Spirit or a Deity could function as one in one instance and as the other on a different occasion (or even take on both roles at the same time).

The difficulty with this "Third Kindred" for me is that the functions of beings such as the oak tree, the squirrel in it and the boulder next to it are very different than those of the Aos Sí or the Gruagach or any of the "Fairy Folk" types. My solution has been to address these two groups separately, with their own offerings, etc. As with each of the Kindreds, I make very clear in my invitation what characteristics define the group and its function in the work.

Yep - the distinction between the 'High Sidhe' and 'nature spirits' seems a problem. One thing that makes sense to me is that the medieval High Sidhe include a lot of the Mighty Dead. I suspect that the Norse idea of the 'King Under the Mound' who holds court and to which some of the dead may go had a lot of influence on medieval gaelic lore. That still doesn't cover certain sorts of wight, like gruagachs and the beings who become house-boggies, etc.
I tried to address some of those notion in my Nine Duile analysis of the 'nature spirits'. that's under spirit-arte on this blog.