This is to some degree a response to Drew Jacob's blog article here. It isn't really a systematic answer, but just some thoughts that spun off. Here it is anyway, by way of something that isn't about the Court of Brigid (much). 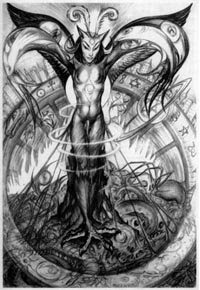 Polytheism is a puzzle. One of the real advantages to monotheism, in terms of ready applicability and easy understanding, is that there’s only one being to worry about. Do you want rain? Ask God. Do you want sun? Ask God. Human fertility, death of enemies, justice for the wicked, salvation for the hopeless – all the same fellow. That certainly makes it easy to focus one’s devotion and aspiration. The bad news (forgive, me...) is that there’s no such fellow. In my theological opinion everything that is accomplished by prayers to ‘God’ is accomplished by some spirit, just as all our requests, etc must be. The whole premise of magic (as spirit-arte) and magical religions is that actually knowing who one is praying to, making the right offerings, addressing them properly, etc will bring better results. If I didn’t think that was the case I wouldn’t be a polytheist.

I think that polytheists sometimes get trapped in the monotheistic notion that a ‘god’ is some big special category that is worthy of big special attention. Often people refer to ‘worshipping’ the Gods, while they ‘honor’ their Ancestors, Landwights, etc. As far as I can see this is a direct carry-over from Roman Christian theology. That system teaches that only their God is due ‘true’ worship, conceived as awe-filled surrender and open-ended fealty. This they call ‘latria’, from the same root found in idolatry. Against this they contrast the mere ‘honor and reverence’ paid to Mary, the Saints, etc, which they call ‘dulia’. By this dodge they explain why it is acceptable to burn incense, recite prayers and hymns, etc before images of beings other than their God. Of course the Christian Reform found it all unacceptable, and simply disallowed the ‘dulia’ forms, producing the trimmed-thin mythologies of modern Protestantism.

To me it is also all nonsense. There is no theological reason to make a distinction of kind between the honor we pay to the Gods that that we pay to the Landwights or the Dead. In fact there is no clear boundary between those poetic categories. One tribe’s ancestor may be another’s more distant god, etc.

I think there’s a tendency to try to build Pagan ways around the Gods alone. The impulse to think of ‘religion’ as being about ‘god(s)’ has a strong current behind it. I think that if we’re to actually resemble what the old ways were like we must widen our field of worship, as well as narrow it.

For any local expression of European Paganism (I’m less qualified to talk about other kinds) the Dead and the Landspirits are often as important as the gods. As I look at Euro-folk customs with animist eyes I am starting to see this more often. What is the corn-dolly, dressed in her gown, but an expression of the Spirit in the Corn? Not some deity from poets’ tales, with a shrine in the Grove, but a spirit present in and as the corn, to who worship is due. If there is healing at a spring or stone, it might be because of the power of one of the goddesses, or it might be directly from a pool-nymph or stone-wight, some Noble being who has taken kindly to people for a while. The model of the daemonic in Paganism would reconcile all this with deistic polytheism nicely, with some local daemon of a goddess tending the manifest locale.

So I don’t think there ever need to be any ‘missing gods’, if one includes the non-Gods (as the Gaels said it) in one’s spiritual cosmos. By making it part of the work to know the local Dead and the local rulers of the ‘Sidhe’ (or as you like) you will never want for an agent to aid in whatever work may come to your hand.

I'm with you all the way. The form of Witchcraft I practice does not worship our gods, but honors them alongside our ancestors and other spirits, who we work with equally - if not more than with the gods.

For me the gods are our most ancient ancestors, and we call on them for the big feasts and for really big stuff, but most often we work with the Mighty Dead, and the spirits of place.

Thank you for a very well-executed piece that is close to my heart!

I want to *demote* the idea of worship from some higher-order surrender, mystical submission whassis to its traditional meaning of 'ritualised respect'.