The Court of Brigid Grimoire 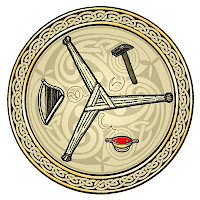 The core of Pagan magic and religion is contact with the spirits, from the mightiest Gods and Goddesses to the most common local herb-wight. Western magical arts have preserved ancient, reliable methods by which spirits can be contacted and their aid gained for both spiritual growth and practical success. Because these arts have been preserved in the rites of ceremonial magic and the grimoires they have often been ignored by modern Pagan magicians. Now Ian Corrigan has taken the outline and structure of classical spirit-arte and applied it within a polytheistic, nature-based worldview. These methods were presented in The Book of Summoning, and have been being applied experimentally for the past several years. The first public result is the work of the Court of Brigid.

The Grimoire of the Court of Brigid is a suite of rituals that allow the magician to gain the aid of one of the most beloved of the Celtic deities – Brigid the High One, Goddess of Fire and Water, Lady of Skills and Inspiration, Keeper of the Good Hearth. With Her blessing the magician then calls and treats with a variety of spirits of her court. By making alliances with those spirits the magician is able to do a variety of more casual magical works, or spells.

The method of this grimoire combines traditional hierarchical evocation with a reverent and benign approach to the spirits. They are convoked in friendship and alliance, with proper offerings for each. There is no element of coercion or threat, and no discussion of ‘angels’ or ‘demons’. The spirits serve the Goddess and, by her blessing, they serve us. In this way the magic of the Court is placed firmly within the rites of Pagan religion.

The Court of Brigid grimoire is focused firmly on practical work, providing full instructions and conjurings for each of the works. It provides a full system of ritual work, from the creation of the proper sacrifice ground to the Three Rites by which the alliances are made, to spells and boon-rites for specific goals. Also included is the full text of the group rite that was the basis of the work. The names, powers and sigils of twenty-eight spirits are presented. These spirits showed themselves to our seers at one of two rites performed over the past year.

The work of the Court of Brigid is unique in current occult publishing – a system of formal evocation based firmly in a polytheistic (not to mention Celtic) context. Let the Fire of Offering be lit, and the spirits come to our call! 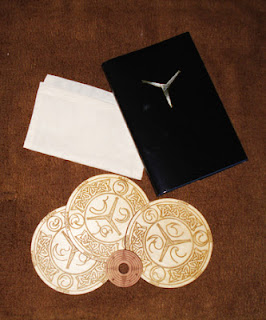 This is a collectors set, with only nine examples commercially available, never to be repeated in this form.

The set includes a dust-jacketed hardback edition of the grimoire; uniquely typeset, signed, sigilized and numbered by the author. Each set includes three 5.5” laser-carved wooden talismans, numbered in sequence with the books. These are the keys to works of inspiration, prosperity and healing under the power of the Goddess and her spirits, as explained in the grimoire. In addition the set includes a small carved wheel of Fionn’s Window and a roomy cloth bag in which to keep the disks, making a remarkable Pagan and occult collectable with practical utility for magical work.


The Court of Brigid Druidic Sorcery Set is available for $81, plus $10 for shipping in the US. International orders should inquire about payment and shipping cost. Interested parties should email me privately at Tredara at ncweb.com. Sets will ship in mid-November.

Very cool. Free to promote in people of the tree if you like.