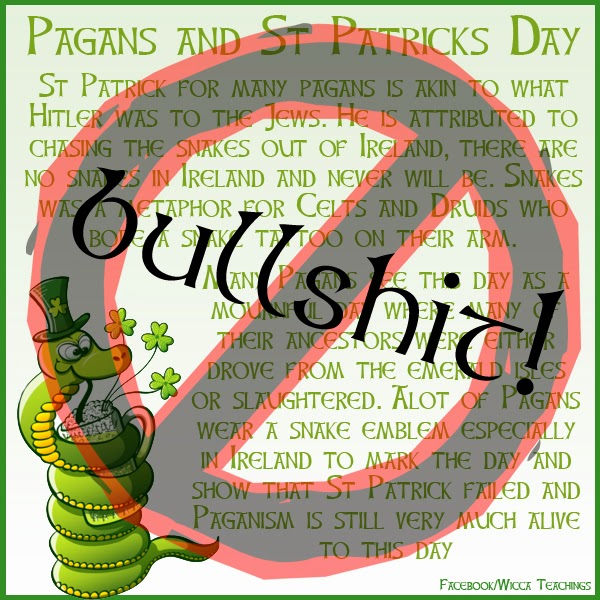 Let's be very clear - St Patrick was no friend of Pagans. However he is in no sense responsible for a genocide of Celts, Pagans or Druids in Ireland. Since the bad folkore that circulates on the internet has trouble distinguishing between those three terms, let’s start there.

Celts refers to a language and cultural family that was prominent throughout Europe between c. 800 bce and the conquest of most of their territory by Rome at the turn of the first millennium ce. The Irish of St Patrick’s day were Celtic-language-speaking people, living a Celtic-style culture. They remained so after the conversion to Christianity, save for the radical change in religion.


Druids were the priests, judges, healers, and magicians of the Celtic tribes. They were not themselves a people or tribe – there was no ‘druid people’. Rather Druid was a profession among the Celtic peoples.

“Pagans” is what the incoming Christians later called the religions of the traditional peoples of Europe. Characterized by land and nature-centered worship, polytheism and ancestral heritage, it became a term for “the Enemy” as the Roman Church gained power. Celts kept Pagan ways, the Druids were the Celtic priests of those ways.

Pagans being readers, most of us know the outline of Patrick’s legend. A British Celt, he is taken by raiders and enslaved in Ireland. Escaping, he returns to Britain. Converted either miraculously on an Irish hillside, or culturally in post-Roman Britain he undertakes the priesthood. His visions call him back to Ireland, and his mission becomes the stuff of legend.

Legend is the right term for most of the story of Patrick in Ireland. Druids managed the Irish religious life. Since St Patrick made it his job to “bring souls to Christ” he would have found himself preaching in opposition to the Pagan ways, and in opposition to Druids. He (or “God”) is recorded as defeating and destroying various Druids in what amount to magical battles. These are the fantasies of the Church novelists who write the “Lives of Saints”. In some stories St Patrick takes the place of Pagan Gods, such as the famous tale of the destruction of Cromm Cruach

Snakes are not a metaphor for Pagans in the famous story. The snake legend occurs very late, and is not part of the original Patrick tales. It was copied from other saint's lives to add another cool story to Patrick's tale (See Morgan Daimler's article, below).

There was never a holocaust of Paganism in Ireland – at least not in the early stages. At St Patrick’s death a few kings had been converted, and the first monastic houses had been founded. Those houses, no doubt informed by the Celtic tradition of scholarship, later helped restore Christianity to Post-Roman, Anglo-Saxon England. The Church grew slowly over several centuries, and no Christian missionary was ever martyred by the Pagan Irish. Even in the 7th century (hundreds of years after Patrick) the compilers of law saw need to discuss the place of Druids in the system.

Here’s the thing – I love St Patrick’s day. Don’t let any modern Pagan tell you that sobriety and modesty is the traditional way to keep Pagan customs! I enjoy the celebration of Irish heritage, culture and struggle here in the US, and the chance to tell a few truly old stories, some years. However it seems just kind of… lame to spend emotional energy “Hating the Romans” here in our age, and St P just wasn't particularly a villain.
Here are a few links that do a better job on the scholastics of this than I mean to do this morning.

well said Ian. I appreciate seeing more people speaking out about this and offering good information.

Celebrate don't hate. Be part of the party-------continue welcoming Spring.

OH I forgot Thank you Ian.

I am an Irish pagan born reared and living in Ireland and I do not celebrate the day and I am not along, many other pagans boycott it.

So it's not bullshit.

Happy St. Gertrude's Day from the cold clime of Connecticut!!

The Formula of Life said...

I find your interpretation rather skewed. Ritualistic customs, or 'religion' as most know it now, has and will always be about tradition. To label a ritual custom based on locality is political, politics is big business and business is power. You would be wise to follow what you know.. Earth, Wind, Fire, and Rain all held together by the two circles, the Sun and the Moon.

If you read his confessions, you will see how he manipulated and persecuted the Pagans from a primary source. And Patrick, like many of the early Christians, probably converted the government beforehand, like kings and royal houses, because they had the power and Christianity appealed to them because of its ability to control the population. Once that was done, the highest governing powers just imposed it on all of their subjects in every way imaginable. That's exactly how they took over Rome and converted the empire, by first taking control of the government. So yes indeed, people like Patrick did persecute the Pagans in many different ways. With that being said, it's irrelevant to me what someone chooses to celebrate in their own personal lives. Do what you like. But to say there's no historic proof that Patrick persecuted Pagans, is to ignore the common tactics of the early Christian movement.

You can't take hagiographies seriously as history. Of course the church would hope to remember their missionary as a 'fighter against evil', but I see no reason and no of no historical evidence to suggest he had any major impact in his time. I'm not the sort of interpreter to assume that if a story says that he defeated or killed a Druid in magical battle it refers to a political killing. Certainly there was not significantly less Paganism in Ireland at his death than there was on his arrival, even if there was perhaps more Christianity.

I wouldn't doubt that Padraigh would have *wanted* to persecute Pagans, but I don't think he had the juice to actually accomplish it.
And of course Ireland is an exception to much of the early conversion pattern. There's not much (if any) sign of a militant conflict between the Irish natives and the developing Church. There is not a single Christian martyr from Ireland - a huge difference to, say, Frankish conversion. The process of arrival and acculturation of Christianity in Ireland is a fascinating puzzle, in which St P is just a set-piece in one corner.

So the church never committed genocide, never murdered millions, never harmed the pagans in any way, probably never came to the americas and committed genocide there under their idea of "divine manifest destiny"? thanks for clearing that up for me. You cant take anything written by members of the church as serious history, they tried to cover up their crimes, and they continue to do that to this day.

I'm pretty sure the article never addressed any of the things you mentioned. It's specifically about St Patrick and his historical and alleged deeds. Not about what White, Christian people have done as a whole under the banners of Religion and Colonialism. Yours is one of the worst strawman arguments I've seen in awhile

There was never a Pagan holocaust in Ireland caused by St. Patrick? Really? Even one of your sources states, "Quite frankly the rest of Patrick’s hagiography has him dueling Druids right and left, killing those who oppose him with callous righteousnes," maybe try actually learning what you're talking about, rather than trying to skew "sources" to say what you want them to, instead of what they actually do.

This is bs. Celebrating st patric is celebrating the loss of celts to freely practice their religion of CHOICE...let's not pretend christianity wasn't ultimately forced upon everyone. My ancestors weren't given a choice. Even if st patric isnt directly responsive for genocide...forcing christianity upon us IS. And stpatric was a part of that.unless you are Christian why WOULD you celebrate a Christian saint?

Celebrating a Christian white helped "convert the celts" is equal to celebrating every single Christian who forced us to be what they wanted us to be...by way of give in or die

His mission was considered a failure by the catholic church... but I watched a movie for Catholics about him as a kid. It was all about him making druids look ridiculous in favour of the new god. Even if he wasn't directly responsible...why would any celt or pagan want to celebrate someone who helped the Christian mission of forcing them to worship the new God?