2014 was not an “easy” year, for us or for a lot of folks we know. It was not a stay-the-same year; not a slide-on-by year, not a rest-comfortably year. Considering that none of me is any younger than I once was, the pace has been both challenging and invigorating, with occasional sadness-sauce. I may have another year like it before me.

Most notably, I lost one of my best friends this year, to fast cancer. It is plain that the older we get, the more dead people we know. This comes under “facts of life”. However, the shock-level of seeing one’s own generation begin to go is notable. It isn’t something I look forward to growing accustomed to. 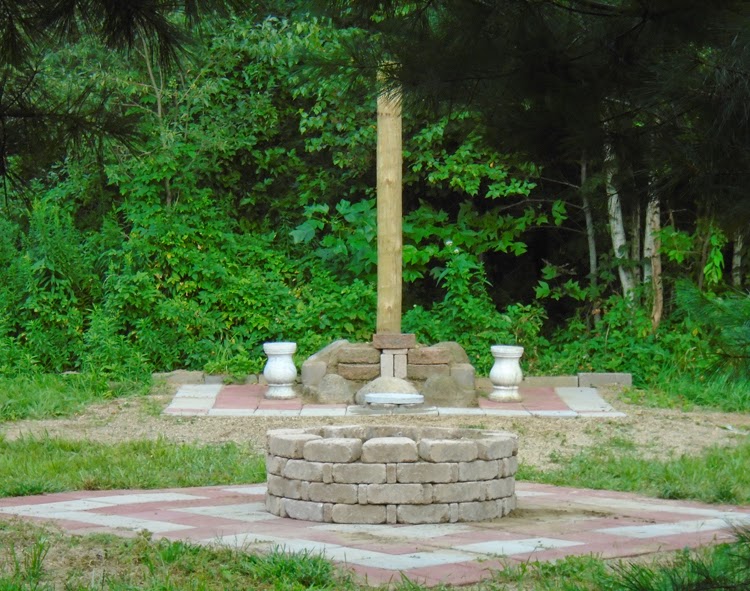 Regular readers will know that we moved ahead with work on our new property. Our most successful effort this year was the new Nemeton which has the basics in place, and next-year’s designs firmly planned. It remains our goal to make a comfortable outdoor worship space for 100 or more guests.

We (by which I mean Thomas, our skilled carpenter) also finished the rebuilding of the ‘Cabin’ on the northern edge of the property, on the skeleton of a piece-of-crap house-trailer left behind on the property. It will provide an ‘office’ and registration-house for the future. We've gotten nice gates on the new front door, and look forward to making that the entrance, and not having all traffic arrive past our residence.

Our larger goal is to establish Tredara as a working site for medium-sized gatherings. To that end we intend to build a large pavilion-roof, continue to improve roads, open new camping meadows and otherwise dress and manicure our new garden-forest. Watch this space for various exciting announcements as we move toward spring.

Oh, we ended the year by plunking down some capital for a brand-new Kubota B-26 tractor with front-loader and brush-cutter. Me likey. Moving gravel by the farm-cart load isn’t getting any easier. 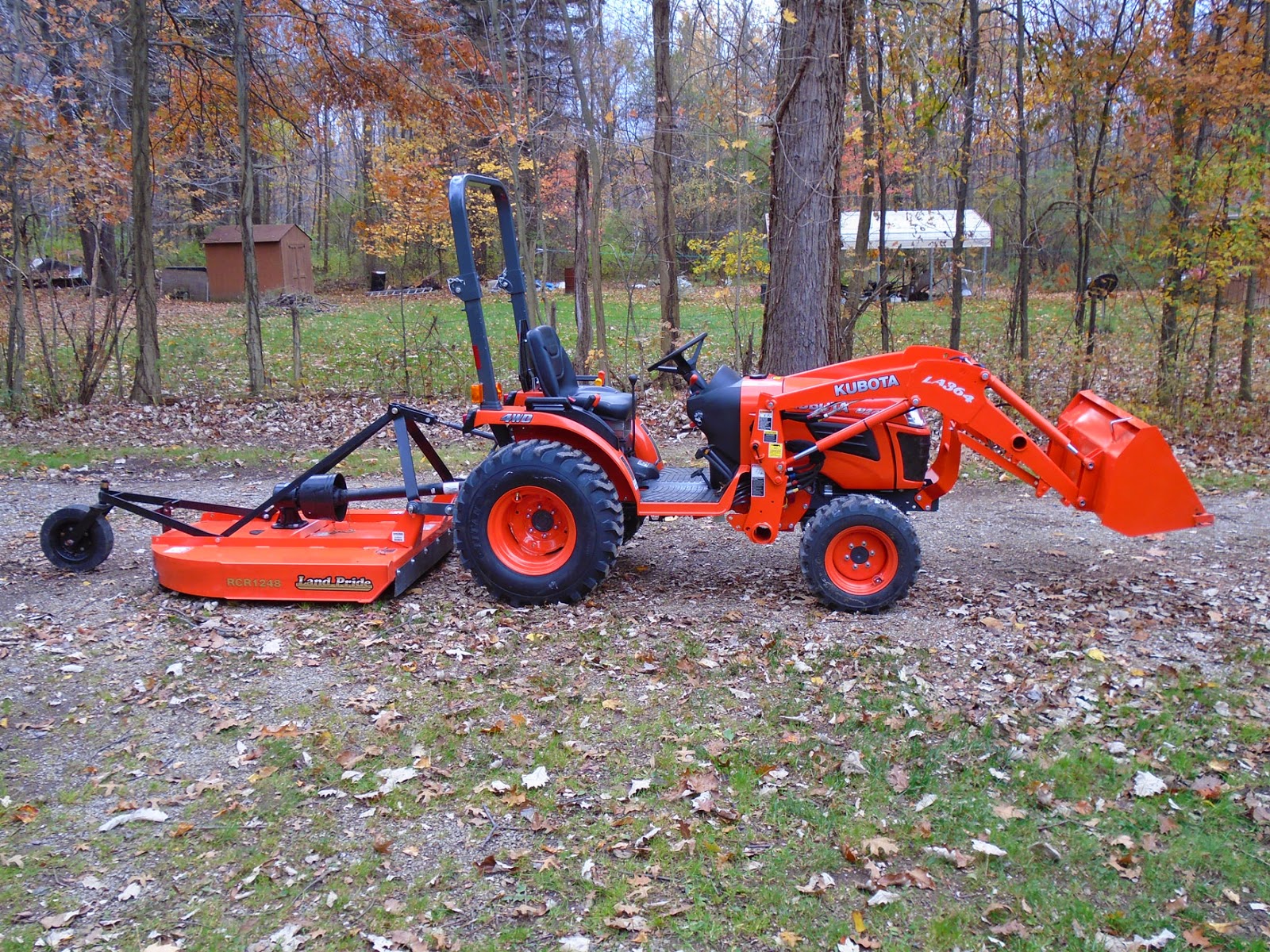 More a shovel-year than a writing year. My intentions just haven’t generated the results – the novel lurks under the bed, smelling slightly of rot yet still wiggling. The Nine Moons work is waiting to be re-organized. However I’ve been somewhat dead-in-the-water for new ideas. Again, that may have to do with increased outer focus. However it is winter, and I must make an effort to get something done.

I am looking at one new outline. I’d like to take a shot at outlining a modern approach to magic based on traditional European ways. It would be an effort to move outside the post-Wiccan circle-style , energy-based ritual model into a de-ethnicized Sacred Center model, emphasis on relationship with the spirits, etc. So far, we’re no further than a chapter outline, but we’ll see.

Publishing
It seems that when I’m not writing, I at least do art. This year I discovered an on-demand card and game-component company, and I’ve been trying to design a viable product or three using its capacities.
The first two many have seen before:
• The Ninefold Druidic Oracle  – my 81-card oracle deck based on core Indo-European and Celtic symbols.
• The Tredara Ogam Pack – a simple presentation of the 25 ancient Irish Ogham letters, with meanings from lore.

The third item got a complete re-issue this year.

• The Travelling Magic Ritual Kit now includes more image cards, a full deck of ritual text prompt-cards, the mini-ogham deck, and tiles for Fire, Well & Blessing, as well as card-stands, all in a basic draw-string bag. Still pocket-sized and perfect for travelling or small-scale ritual set-ups.

The fourth item is new but, well, obscure: 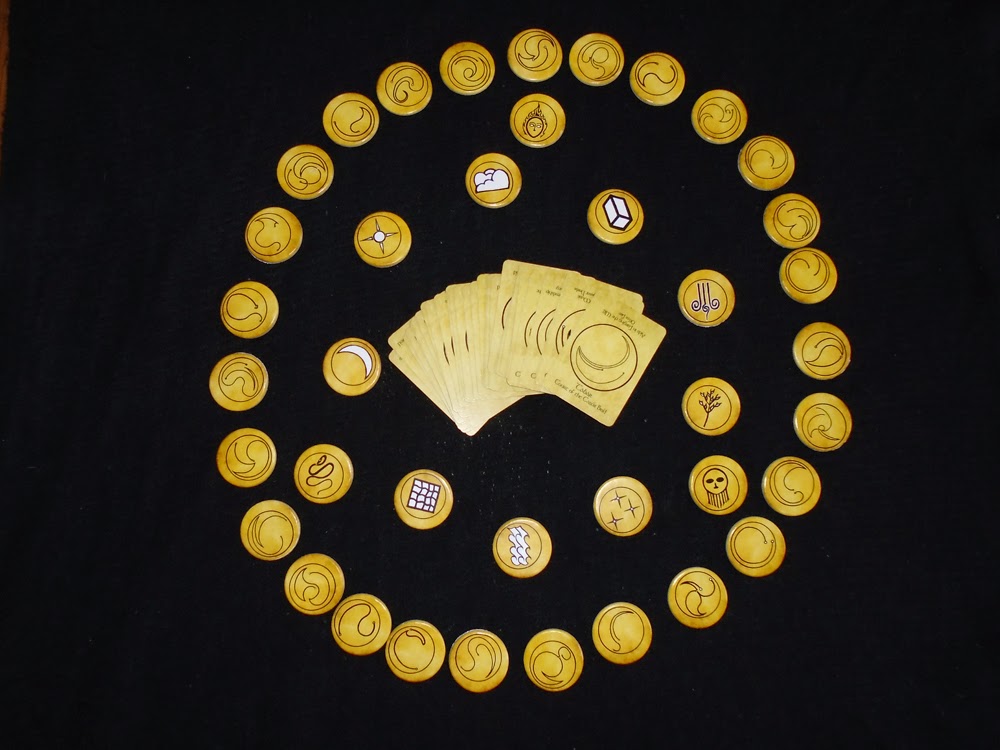 • A Druid’s Conjuring Kit is really an expansion of the Travelling Magic set.
“A pouch of forty-five 1.25" tokens printed with sigils proper for Pagan and Druidic spellcraft.
• Twenty-seven conjure-word tokens - Irish Gaelic words referring to magical intentions, rendered into sigils on the mysterious Fionn's Window.
• Nine tokens of the Druid's Elements - Stone, Soil & Vegetation; Wind, Sea and Cloud; Sun, Moon & Stars.
• Three tokens for the Gods, the Dead and the Sidhe; three tokens for the Land, Sea and Sky at large; three tokens for the Wise, the Warriors and the Landkeepers.

In addition the kit includes a deck of mini-cards based on Ian Corrigan's Court of Brigid work, each card displays the sigil, name, powers, and the proper offering to be given to the spirits of the Court of Brigid. Used with the Portable Temple these spirits can be called to aid the Druid in many kinds of blessed work.”
All packaged with a red velour bag. I gotta say, this is some obscure stuff, but it is also one of the most unique tools available for practical Celtic spellcraft. 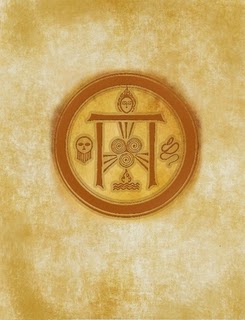 2015
This is going to be a busy year here at Tredara, as we raise funds, recruit community work and build the next round of infrastructure. Comfort-roofs in the Nemeton, a big gathering pavilion and road and camping improvements are top of the list.

I expect to be doing more direct teaching locally for and through Stone Creed Grove. The Grove has a wave of new folks who are ready for the basics. We’ll see if any of that results in a new book.

Incidentally things have heated up here at home on the esoteric front, and I’ll have some journaling on that within a few days. Watch this space.
Posted by IanC at 4:58 AM

Tim and I would love for you to teach us the ways!! Just say when! I have most of the books that are required for the Dedicant Path...but I KNOW that there is much more to it and hands on is more suitable for us both. ~