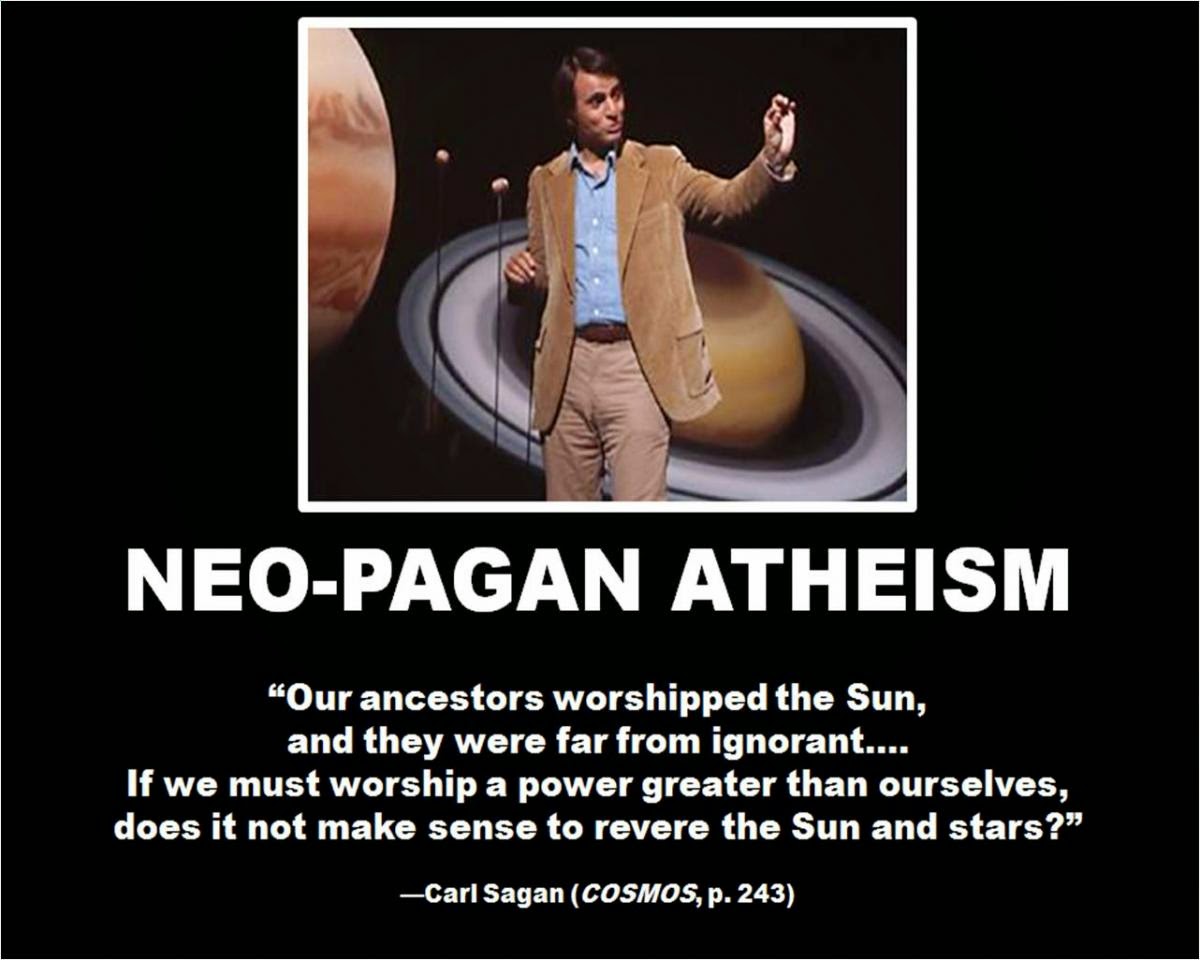 This topic keeps coming up.   In general the Atheopagans are more sinned against than sinning in this last round, but this article raised some hackles.

A certain segment of the Pagan population has decided to adopt in large part the ideology of modern atheism and philosophical materialism. They often consider themselves to be within the strain of modern thought called ‘humanism’, and have labelled themselves as ‘Naturalist’ Pagans. I have no objection to any of this (except the latter, see below). Paganism does not require any fixed set of opinions to be Paganism, and this lot seems reasonably focused on ritual, meditation, and service, which *are* Paganism-indicators, to me. However they are not just Pagans who happen to be atheists, they also seem to act like atheists who happen to be Pagan. Where I find myself objecting is when members of this school present their ideas as Truth of some sort, or as “more true” or “more in touch with reality” than those of more mythic perspectives.

Modern atheism suffers from imitation of Christianity in its evangelical desire to assert its ideas as “the truth”. I’m not interested in doing hard philosophy here; we’ll be vernacular about “truth”. I am entirely unwilling to accept that materialist, scientistic worldviews more accurately describe the reality of religious phenomena than those of tribal mythic systems. In fact I find atheism and materialism in every way inadequate to describe religious phenomena, though they have developed some complex rationales to attempt to do so. Thus I dismiss them as useful “truth”.

On the other hand, I (and many spiritist Pagans) reject the term ‘supernatural’ for the realm or category in which non-material intelligence abides. I view the spirits, in their uncounted species, as being as natural as chipmunks or chairs. They simply haven’t been subsumed into the ‘scientific worldview’ that started quantifying what it could reach a few hundred years ago. One of my favorite teachers said “There can only be one Order of Nature”, an aphorism that makes sense to me. Thus I simply don’t use the idea of ‘supernatural’ at all. For that reason I do resent the attempt to co-opt “Naturalist” for the materialist position - it simply fails to describe the spectrum of modern Pagan ideas accurately. Most Theistic (an inadequate term for polytheism and spiritism) Pagans, I’ll hazard, are not ‘supernaturalists’.

To be clear, in my local Pagan culture such discussions are relegated to the beer-hall. They play no role in the practice of our religion. The truth or falsity of any given world-view, from traditionalist to materialist, is irrelevant to practice. My own experience has been that when educated materialists are exposed to well-crafted spirit and deity work for a few years a good percentage will find themselves… let’s say “less atheist” than previously. Several in my experience have become devotionalists.

Atheism arises naturally in certain minds, and enters others by conviction. I associate it with other human specifics such as tone-deafness. Even tone-deaf people can participate in music by well-planned charts and by experience. Thus I’m willing to assume that folks who simply don’t perceive the spiritual intelligences of nature (or who have rationalized that perception away) can participate in religion to their own benefit. However I’m unwilling to accept assertions that a&m are true in some sense greater than the assumptions of a Voudun priest or Shakta tantric. Some atheists want to be participants in the Pagan movement. I would heartily suggest they note the community aversion to proselytization. This is not *merely* philosophical laziness, but a real awareness – a skepticism - of how unlikely any specific model of ‘truth’ is to be the truth in fact. In general “proclaimers” and “revealers” are viewed as pests.

I would suggest that Atheopagans will find themselves welcome to the degree that they refrain from suggesting that the belief systems of other Pagans are false. After all we all agree (at least I agree with the atheists) that personal philosophical biases are unimportant as definers of Paganism (or polytheism). No matter how convinced one is of their ‘truth’.
Posted by IanC at 7:32 PM

There's a lot I agree with here, and I especially agree that our common rituals can be enjoyed by all, regardless of belief. If one Pagan sees the gods being invoked as literal, and another sees them in an allegorical or Jungian way, then fine. For years I've pointed out that we Pagans don't believe in a "Hell" for those with "wrong" beliefs. I hope that can give us some greater latitude of tolerance for differing beliefs. Blessed be.

I agree with much of this as well, but find it interesting that it is the atheists who are called out for asserting "Truth" when this whole latest dustup began with a hard theist doing exactly that.

Let's be honest: pretty much everyone is invested in the "Truth" of their cosmology. While atheists have science to support their position, others have experiences they believe justify theirs. It is completely non-unique on the part of atheists to believe that their understanding of the Universe approaches a universal truth.

As Jon says, tolerance. My post at Atheopaganism doesn't express any intolerance for theists, though it disagrees with them; it expresses a resistance to being swept under the rug--or ushered out the door--by a hard theist apropos of nothing but an arbitrarily applied personal opinion.

I should add that I am not a "movement atheist", and have never been. I've been in the Pagan community for more than 25 years and have never been interested in proselytizing. Much of the criticism leveled here at atheists is simply off the mark as it relates to me, my Atheopaganism, or my motivations in working to build culture and community for Earth-honoring science-rooted skeptics.

Atheopagan, while I was not particularly offended by your suggestions that spiritist Pagans are simply mistaken, those suggestions are surely present in your article.

Personally I'm an agnostic in the classical sense - I do not think that humans have the equipment to arrive at a reliable 'absolute truth' about the nature of the universe. We will always, and can only, deal with the best guess we can prop up this century.

Thus I reject both atheism and an absolute belief in objective spirits.

I'll admit to venting some of my feelings about modern atheism in general, though the column never refers to you at all except to point out your article. I consider folks like Dawkins to be half-educated trolls on the subject of religion - I'll admit to a degree of ambient pique about the whole topic.